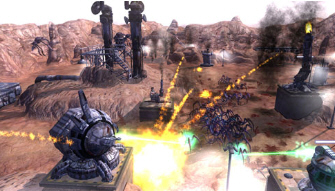 Savage Moon is an all-new PlayStation Network title revealed by Sony; which it announced in addition to Warhawk: Operation Fallen Star, which is the third expansion pack for Warhawk that will be released tomorrow, August 28th, 2008.

Savage Moon is an all-new game that will be coming to the PlayStation Network. It’s described by Sony as a “classic tower strategy” game with this game’s unique hook being that it takes place in space. Players are assigned to protect a planetary outpost that has being overrun by “gigantic, ravenous space bugs” ala Starship Troopers.

Like other games of it’s ilk, players will need to put down towers in the most ideal spots to handle the oncoming infestation so you aren’t overrun by the “ravenous space bugs”. You then can convert kill points into better weapons.

As far as Warhawk: Operation Fallen Star is concerned, the third expansion for the game will introduce a new forest location called Tau Crater, where some “experimental technology” has been recovered from a Chernovan warship that has crashed. What is said technology? JETPACKS!

In addition to the jetpacks, the game will include 10 new battlefields.