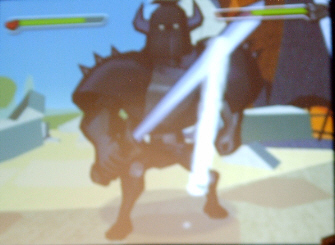 EyeToy: Hero and EyeToy: Pom-Pom are two new Sony camera games that have been announced for the PS2.

Both of these all new titles will take advantage of the Sony Eye Toy’s new capability to track specific colors in order to change up the gameplay in some interesting ways.

So far nothing is known about EyeToy: Pom-Pom (but it’s not to hard to figure out how it may involve cheerleading) but that’s not the game that made the new EyeToy announcements interesting.

The game that did do that was EyeToy: Hero, an all-new story-driven Eye Toy adventure (the first Eye Toy game in the series to feature a real story and goal). The game is played from the first-person perspective and comes with a real-life toy sword (yes you read that right) that you will hold in your hands while playing. The camera has the ability to follow the sword’s fluorescent-green foam as it moves in your hands, giving you true 1:1 motion as wherever or however you move, the sword moves on-screen.

The game is split into four zones which are made up of story-related mini-game style sections that each feature a different take on motion-based swordplay. Each zone culminates in a boss battle, which once beaten, will see your sword gain additional powers.

One power had your sword turning into some sort of fiery beacon that you could use to guide yourself through darkened passageways. What’s really interesting is how creative the game is and how greatly they are using the technology. When your sword is glowing, you must put it behind your back in order to dim the light and not alert enemies to your presence. This is something that cannot be accomplished using a Wii Remote.

Another section of the game had the player blocking thrown fruit with the sword while avoiding chickens (which you could also whack for some insuing hilarity). The game even contained a boss battle against “The Black Knight”. Since the game senses the sword via it’s color, this means that it doesn’t have to be in motion in order to track it. This was taken advantage of in the boss battle where you had to block incoming attacks by holding the sword in the correct position! You could also parry the Knights attack by slicing his sword as well as duck the Knights most powerful attack.

Finally they showed off a stage in which you flew atop a dragon and fought off incoming griffins. This section also used the Eye Toy Microphone. By shouting “Fire” the dragon would Breath Fire. The sword also had wind power that allowed you to absorb tornado and fling them back at enemies.

As cool as all this technology sounds, it does have it’s limitations. Unlike the Wii, the EyeToy can only has 1:1 motion control in two dimensions (displayed on-screen) not in 3D dimensions like the Wii Remote. It also isn’t accurate enough to register subtle motions or the turn of your wrist. And why were these announced for PS2 and not PS3?

Either way though, some more very unique games from Sony. Always a good thing.