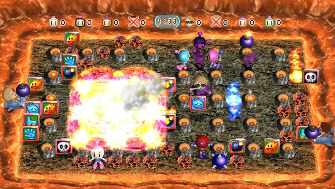 Hudson has been one of Nintendo’s strongest supporters and was on-board early on for the Wii Virtual Console by allowing their huge catalog of classic games to be added to the service. When WiiWare was announced they also were one of the first companies onboard with their games Star Soldier R and My Aquarium.

In Bomberman Blast, Hudson bombing mascot returns to Wii with a new take on the classic Bomberman gameplay everyone knows and loves. This version’s most notable addition is online multiplayer via Nintendo Wi-Fi Connection! This will include 8-Player online battles either solo or as part of a team. The game will also use Mii’s which you can sent into a Bomberman Blast Arena and then blast away to see who’s Mii survives. The game will include an online leaderboard and four players can connect online on the same Wii. There will be multiple arenas to battle in as well as a few new weapons. Hudson will also provide tournaments for players to compete in, including one that will be available on launch day.

There original Bomberman was released in 1987 and quickly gained prominence and critical acclaim with it’s classic gameplay that was both simple yet challenging. Since then it has grown into one of gaming’s premier franchises with over 60 iterations of the series on all major platforms, having also been credited with launching the “party game” genre and having early adoption of four-player (and more support). Bomberman has become a video game icon and a mascot for Hudson. 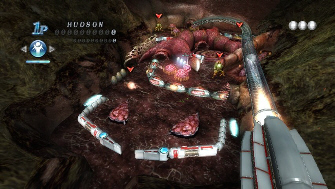 Alien Crush Returns is an all-new update to the classic sci-fi pinball game Alien Crush (which was re-released on the Wii Virtual Console in December of 2006). The viewpoint of the game spans two screens to provide players with more real estate to rack up points, multipliers, and bonuses. There are multiple boards which all feature an eerie alien landscape and enemies that will try to prevent your pinball dominance.

As with Bomberman Blast, Alien Crush Returns major new feature is online play! This allows you to play against a friend to compete for the highest score! The game also contains online leader boards for those that are high-score obsessed. And as with Bomberman Blast, Alien Crush Returns will feature several online tournaments including one that will coincide with the launch of the game.