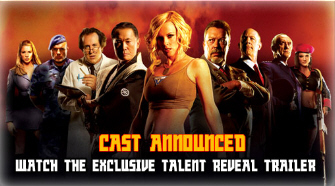 EA has revealed the full cast of Command & Conquer: Red Alert 3 and it includes an all-star ensemble which is perfectly fitting for the highly anticipated upcoming Real-Time Strategy Red Alert revival giving the franchises emphasis on tongue-in-check movie-scenes that use real actors.

The diverse group of actors include a host of award-winners, in addition to action stars, science fiction legends, up-and-coming starlets from around the globe and even mixed martial artists


“This is by far the most exciting cast we have in over 13 years of shooting live-action movies for Command & Conquer,” said Chris Corry, executive producer at EALA. “The caliber of the performances we received, both individually and collectively, have really raised the storytelling bar for the franchise. We are really excited that we will be delivering such a high quality production that is on par with movies and television shows.” “I wasn’t sure what to expect when I came in to work on a video game,” said Jenny McCarthy from the set of Command & Conquer Red Alert 3 while playing Tanya, Allied commando and the most beloved heroine in the history of the Command & Conquer universe. “What I realized is Red Alert 3 is not just a video game, it’s absolutely an interactive movie. This is where the people at home get to move the story forward, and where seeing the plot thicken is a reward for a job well done. And that’s really cool.”

“I think video games are one of the new frontiers for actors and using live action is just another way to connect more easily to the gamer rather than CG or animation techniques,” said J.K. Simmons from the set of Command & Conquer Red Alert 3, who is playing the anti-Communist U.S. President Howard T. Ackerman. “To be in a groundbreaking game like Red Alert 3 where we are using full on shooting of live actors and to be with Jonathan Pryce, Tim Curry and Peter Stormare, it was a great opportunity for a character actor like me to have some fun.”

Also announced is the Command & Conquer: Red Alert 3 Premier Edition. This limited edition includes a bonus DVD (with over an hour of exclusive content – including interviews with the talent and a behind the scenes look at the shooting of the game’s cinematic sequences), exclusive multiplayer maps, strategy tips from the development team, the official soundtrack and an exclusive beta key to a future Command & Conquer game

Those who secure the Premier Edition or regular version of Red Alert 3 now via pre-order will ALSO receive a special bonus package that includes:

Command & Conquer Red Alert 3 is set to ship this fall for the PC and Xbox 360.