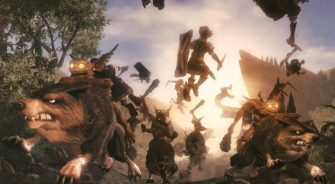 Codemasters has announced that the Overlord and the Minions will headline a series of three new titles for multiple platforms in 2009.

Overlord 2 is the sequel to the original twisted fantasy action adventure and is now in development at Triumph Studios for the PlayStation 3, Xbox 360 and Games For Windows PC. True to form, the Overlord and the Minion horde have their sights set on supremacy and 2009 will also see the series debuting on new formats. Exclusive extensions include the action Overlord title for Wii, featuring minion control through Wii Remote movement, and a dedicated puzzle action Overlord title, for Nintendo DS.

“[Overlord 1] As a million-plus seller is now a significant brand in the ever-growing Codemasters portfolio,” says Barry Jafrato, Senior Vice President of Brand, Codemasters. “With specific titles published across major formats and download content available, has established a huge cult following and won widespread critical acclaim. We’re delighted to have the despot back for this three-game, five-format product line. With Triumph’s hugely impressive vision for and bespoke titles for Wii and Nintendo DS, Overlord is set to dominate in 2009.”

“Epic battles, all new Minion play mechanics, a stunningly detailed new visuals and a fresh theme – ’s really packing a punch,” says Lennart Sas, director and Overlord lead at Triumph Studios. “We’re really excited about shifting the world to a new era where a Roman-inspired Empire rises as the arch-enemy of the Overlord, which leads to an epic clash between the regimented forces of a sprawling state and the faster, harder, more manic minion horde. It’s also great to see the series reaching new formats. The creativity being packed into the design for on Wii and on Nintendo DS make great use of the platforms’ unique features and are perfect extensions to the Overlord series.”

is the sequel to the hit warped fantasy action adventure that had players being delightfully despotic. In , a new Overlord and a more powerful army of Minions take on an entire empire in a truly epic adventure, inspired by the rise of the Roman Empire. As the Glorious Empire conquers kingdoms and destroys any sign of magic it finds, it’s time to go Minion Maximus and send in the horde.

The Minions return smarter, deadlier (and funnier) and are ready to fight in large scale battles that will see their wild pack mentality squaring up to the organised legions of the Glorious Empire. As ever, they’ll do anything and everything the Overlord commands of them, especially now that they can run ravage and wreck buildings and scenery. They’ve also learn to ride: In Minions will be able to mount up and ride wolves and other magical creatures around the landscape and take them into battle, making our band of merry fighters faster and fiercer than ever before. Coming in 2009, is now in development at Triumph Studios in Delft, the Netherlands, for the PlayStation 3, Xbox 360 and Games For Windows PC. 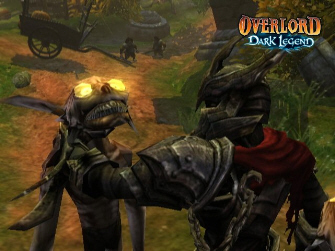 Designed and developed exclusively for Wii, is a brand new action adventure steeped in fairy tale lore with sinister, satirical twists. Set in a time before the original game, players take the role of a new young Overlord. As he revels in command of the Minions, our trainee tyrant will be able to take his growing pains out on the local fairy tale inhabitants as he protects his castle and lands.

Connecting players to the game world in three dimensions, the use of the Wii Remote gives unprecedented control over the minions. For example, individual Minions can be plucked from the horde, held by the neck and then, by vigorously shaking the Wii Remote, throttled to imbue him with some Overlordly power and turn him into a manic minion missile. With a now-explosive body, the insane little critter can be guided into enemies with hilarious, if rather fatal, consequences. 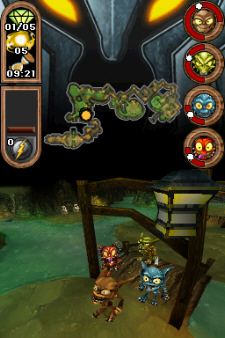 Meet Giblet, Blaze, Stench, and Zap – an elite Minion crew who, assisted by minion master Gnarl, get star billing in Overlord Minions, an irresistible and accessible puzzle action game, designed exclusively for Nintendo DS. In , the Overlord commands the Minion team remotely. The Nintendo DS stylus becomes an extension of his evil will and every precise Touch Screen command is the player-as-Overlord directing, commanding and combining minions in battle, pointing and sweeping them to attack enemies and solving puzzles to execute his dastardly plans.

Controlling the Special Farces team of four, players negotiate fiendish levels and take on a huge range of warped enemies to hunt down the Kindred, a cult dedicated to resurrecting the mighty Dragon Kin, a race of humanoid dragon hybrids, determined to replace the Overlord’s despotism with their own. Extending the Overlord series’ trademark humour, gameplay focuses on the mischievous physical comedy of the minion’s antics and is delivered in a stylised cartoon visual style. Scheduled for release in 2009, is now in development at Climax Studios exclusively for Nintendo DS.