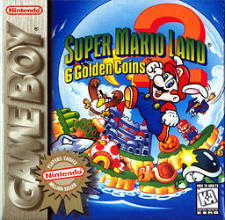 Super Mario Land 2: 6 Golden Coins in many ways represents the Game Boy’s increasing momentum during the early nineties, now with an established userbase at hand and solid software support.

Beginning directly where he last finished off, Mario; savior of the Mushroom Kingdom, returns home to Mario Land only to discover that the evil Wario has seized control of the creatures of the island as well as Mario’s prime real estate; his castle, locked away by the 6 Golden Coins. The only one that Mario can resolve this issue is by obtaining the 6 golden coins (spread across each world) and use them to open the castle gates to overthrow Wario waiting at the top.

This is Wario’s debut title and after Super Mario Land 2, he carries on as series protagonist in the games following. His role in Super Mario Land 2 is largely played down though, with a few tidbits about his origins in the game’s manual which depicts him as an overgrown, angry manchild jealous of Mario since they were both children.

The first nod to Super Mario World begins after you finish the introductory level, Mario moves forward one space and the world map opens itself up. Unlike the previous games though Mario begins with two paths at either side which loop around Wario’s castle (in the centre of the island), branching off into the six respective worlds (called the Tree, Space, Turtle, Pumpkin, Mario and Macro Zones). These worlds are open to you from the outset and you are free to play any of them at your own leisure. Each world is roughly as difficult as the next, offering a similarly mid-range challenge throughout. I imagine that the open ended nature of gameplay would be beneficial for first time platformers or younger children as any difficult stages can be put on hold for later when skills develop.

As discussed in the Super Mario Land review, the Mario platformers can be grouped dependent on their play mechanics which dictate the pacing of the game. Super Mario Land 2 is an overall slower game than its former, promoting a heavier emphasis on exploration, in the same vein as Super Mario World and Yoshi’s Island. The game mechanics slow you down, allowing you to absorb the finer nuances in the environment which often lead to clues of hidden areas and power ups. Much like the other Mario games of this nature, the world map further encourages this style of play with secrets that spill out onto the level select. Furthermore a tally of completed levels lies above your save slot in the file select menu. Each of these mechanics reinforce each other, heightening the sense of adventure and discovery. It’s a fantastic concoction of finely balanced game design working in unison.

Along with the slower movement, the viewpoint is also brought in noticeably closer to the player creating larger sprites with finer detail. Larger sprites in turn allow you to notice the animation in each object which moves with consistently fluidity, as does the scrolling of the screen. 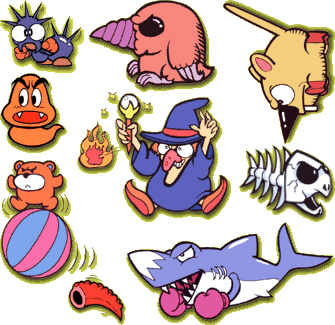 Super Mario Land 2, just like its former was designed by Gunpei Yokoi and upholds his off-beat take on the Mario universe that was present in Super Mario Land. The playing environment is now set in day-to-day real life locations like inside houses, on beaches and whatnot. The usual Mushroom Kingdom staples are present but take a back seat to the insects, bugs and animals which natively populate the environment. This almost gives the game a ‘Honey I Shrunk the Kids’ feel to it which actually works better than it sounds.

As featured on the game’s cover, bunny ears are a new power up giving Mario the ability to sprout bunny ears and use them to glide over long distances. This mechanic flows with the momentum of Mario’s movement and provides another outlet (exclusive to this installment) for exploration possibilities such as floating over large chasms to access an alternative route. Their other function serves to diversify the playing environment. When you wear the ears, Mario’s functionality is expanded and so to is the way you play the game. The diversity that this brings to the game is significant since many platformers rely on ever changing gameplay situations to keep players interested (go on, thank of any good platformer, they all do it) and this feature does just that. It’s more than that though, instead of being just a linear nuance to the game (such as the shoot ’em up themed levels of Super Mario Land) they are embedded right into the character which I think is very important.

Perhaps not as intuitively implemented (due to the limited buttons of the Game Boy) but still significant is the spin jump, actioned by pressing down as Mario descends. This move allows Mario to smash certain blocks in the game and once again adds another layer to the exploration feel of the game.

The coinage system has also seen modification, much like the bunny ears this addition is only apparent in this portable installment. Hearts replace 1UP mushrooms as extra lives and 999 coins can be collected with no life gained for the 100th, these coins can later be used in a mini game accessed from the world map to gamble for additional lives. This (arguably) increases the significance of coins in the game.

Fun Factor: 9
Solid by franchise standards, pretty good compared to everything else. Feels just like Super Mario World on a smaller scale and it fits in your pocket! New mechanics work themselves naturally into the rest of the playing style. Not as deep as the console iterations but stands fine in its own right.

Graphics: 9
Super Mario Land 2 increases the size, detail and complexity of its sprites from the original game while maintaining a flawlessly smooth scroll rate. Animation is also noticeably fluid with the larger sprites (possible due to using an enhanced Super Mario Bros. 3 engine). Lots of smaller details and subtle effects which go a long way to propel the overall visual presentation.

Audio: 9
The loops have been lengthened but otherwise satisfactory tunes which won’t grate on your ears which is probably saying a lot for 4-bit sound. Sound effects are much the same; little to complain about and will keep you smiling.

Ingenuity: 8
Not so much invention as adaptation of familiar mechanics to a handheld style of play. The uncanny take on the Mario universe still feels interesting, preluding into the Wario mini-verse. The bunny ears and reworking of several series standards add a twist to the expected formula, and are executed in typically intelligent fashion.

Replay Value: 8.5
The open ended design makes way for a significantly longer play through by having hidden levels spread throughout each world. These levels are often flaunted on the world map and will have you returning to the game upon completion to clear with a 100% completion rate.