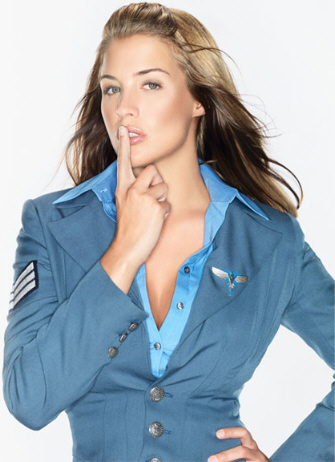 This will mark the British actress’ debut (who is a former star of Hollyoaks and “I’m A Celebrity . . . Get Me Out of Here!”) as a character who will be familiar to fans as a sexy military officer with a twinkle in her eye and a British “stiff upper lip”, she is a communications officer for the Allied coalition in their fight against the Soviet and Rising Sun superpowers. You’ll know her from all Command & Conquer games as the “building!” and “silos needed!” voice-over of the Electronic Video Agent also known as EVA! No idea yet if it’s an homage or her origins.

Here is what Atkinson had to said about getting the part, “I’m a gamer and the chance to act in one of the best loved game franchises was an opportunity I was really keen to explore – especially as Eva is such a strong female character. The worlds of gaming and film are getting ever closer and as an actress I wanted to explore this exciting new area of drama, broaden my acting skills and continue the active, outgoing side of my personality that I showed in I’m A Celebrity…”

Gemma was in Hollyoaks for five years as troubled teenager Lisa Hunter. She later appeared in ITV’s primetime show Soapstar Superstar and last year she bravely stepped into the Aussie jungle to battle in the bush tucker challenges in I’m A Celebrity…Get Me Out Of Here!. She has a role in forthcoming Brit flick Boogie Woogie alongside Jamie Winston, Christopher Lee and Heather Graham, which hits cinemas nationwide in August 2008.

EA marketing manager Stuart Lang said: “It’s great to have Gemma on board for such a popular gamers’ game as Command & Conquer Red Alert 3. We hope that fans of both Gemma and the Command & Conquer universe will be delighted at what they see when the game goes on sale in October. She will also be taking part in EA?s Be The One event in Trafalgar Square later this year, which forms part of the London Games Festival.”

Command & Conquer Red Alert 3 will be on sale in October for PC and Xbox 360.

If you want another Red Alert 3 wallpaper with Gemma Atkinson, click the below image for it. 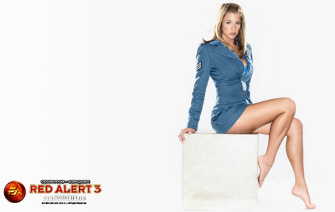 Different resolution versions of both wallpapers for your desktop can be found at redalert3.com.