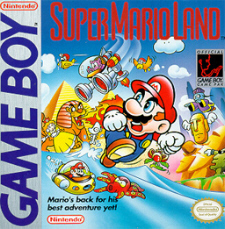 Super Mario Land, alongside other early Game Boy classics, should best be remembered for its role in establishing portable gaming as an individual medium. Games such as Mario, Tetris, Donkey Kong Land and Kirby; miniaturizations of their console counterparts, proved that through the steady balance of hardware economics and portable game design, ‘gaming on the go’ was indeed a viable alternative to console playing. The synergy between these games was infectious and it was their combined effort that would create the initial demand for the Game Boy. This was the kick that portable gaming needed to launch as a platform and without it the portable gaming market would not be the success that it is today.

What these titles share is the foundation of great portable game design, what they don’t share though is perhaps why you are reading this review. Super Mario Land is a fantastic title and not only for the reasons just listed, this title managed to carve a significant niche into the lore of Mario universe.

Editors Note: Today we’d like to introduce you all to VGB’s newest review writer: Daniel Primed. No doubt after reading this retro review — and in time his future reviews — you’ll come to agree with us that he’s got the writing chops to inform you about classics such as those in the Mario/Wario Land series. Take it away Daniel! …

Mario Land is unconventional, in that, in most cases it’s not derivative of its older NES brothers. Mario’s sprite representation is in essence a monochromatic iteration of the original Super Mario Bros’ and while he does control with the same weighty physics as he always has, the environments that you run through, enemies that you head stomp and vehicles that you man are all foreign to the Mario universe. This being because Super Mario Land is set in the ‘somewhat multicultural’ world of Sarasaland instead of the traditional Mushroom Kingdom. This means that all of the usual Mario staples have been replaced; Bowser by Tatanga, Princess Peach by Princess Daisy and most of the enemy set (with the exclusion of Chibibos that look/act exactly like Goombas). Much of this change can be attributed to Gunpei Yokoi taking the role of game designer over franchise creator Shigeru Miyamoto. The differences aren’t just cosmetic though; the level design, enemy orientation and overall flow of the game is less natural and balanced than Miyamoto-san’s game (but by no means bad or less of a game). 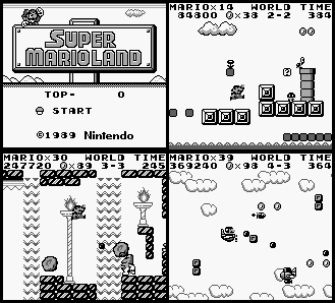 The unfamiliar décor is actually the greatest strength that this game has to offer and is what makes the exhibition feel so refreshing. With all this talk of difference though the game remains true to the expected formula; Mario platforms his way through a series of progressively difficult stages each sanctioned into set ‘worlds’ with their own thematic vibe. The thematic though differs from the typical settings of element centered worlds (ice world, lava world etc.) instead replaced with a more “cultured” set of locations. There are Egyptian, Aztec and Japanese worlds, just to name a few. So for veterans in the sport of Mario platforming, this orientation can be summed up with “same rules, new environments”.

Now let’s talk about that “sport” for a moment. There’s a particular quality that some Mario platformers inherit in that, the run and jump mechanics fit perfectly into the mold of a digital triathlon. That is; you run, jump and dodge your way through various stages at the quickest possible pace, speed running, if you will. While not necessarily an emphasized way of play, it becomes clear after playing so many 2D Marios that such a mechanic polarizes this branch of platforming.

Now, if you understand this language then chances are you’ll know exactly what to expect out of this title as it falls into the “sports” category of Mario platformers. If you aren’t familiar with this concept though then think of Super Mario Land as playing an extension of the original Super Mario Bros (NES) rather than the later Super Mario World (SNES). It should further be noted that this attribute of Super Mario Land benefits, in such a way, to other aspects of Gunpei Yokoi’s design. Most notably how the game deals with screen size.

If you look at the screenshots and video, you’ll note that despite the smaller resolution of the Gameboy (128 x 123 pixels) everything in the game is fitted to a good proportion, allowing you to see a good deal of sky, in fact there is more on screen here than in the original Super Mario Bros (256 x 240 pixels). This is achieved by the environments and set pieces being significant smaller in size (ie. zoomed out). What this means for you the player is that Super Mario Land is a bit more tricky, perhaps even finicky (to use such a term!) when it comes to landing your jumps. Furthermore this isn’t helped by the generous amounts of moving 3 block platforms over large descents. It can be a little difficult, even frustrating in parts. The only alternative option though is for the game world to be larger (ie. zoomed in) which wouldn’t work given the speed in Mario’s step and lead way that is required to keep moving (as we have learnt from the Sonic Game Gear titles). 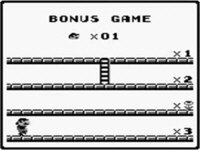 Fortunately this is somewhat remedied by the end of stage bonuses. At the end of each stage sits two doors, one on lower ground, the other raised above. If you enter the higher up door then you automatically partake in a slot wheel like mini-game involving 4 platforms and 4 bonuses including lives and a fire flower before proceeding to the next stage. The trick is to get to that raised platform you need to traverse a difficult set of jumps to get there. So while you may die more often, there are more lives at your disposal.

It can be frustrating at times when you miss a tough jump but I found it hard to blame the game for it. The levels in Super Mario Land are very well designed and have a distinctively different feel from the other games (once again a cue to Gunpei). The design is different, partly because it is a little unconventional much like the rest of the game but also because the difficulty level is perhaps a notch higher than the typical Mario fare. I’d place Super Mario Land in between the original Super Mario Bros and Lost Levels. This results in some simply diabolical level designs. Diabolical in the way your platforing senses may be accustomed to. It’s quite easy as a gamer to build up a taste as to how a typical level from Super Mario Bros, Super Mario Bros. 3 or Super Mario World plays out. You build these things up over time, sure. Super Mario Land though won’t reward you for such a instinct, oh no, rather banking on the unpredictable and through its tough levels will demonstrate why you are such a clumsy participant in this sport.

Fortunately though the game provides a break from the stressful platforming with a couple of shoot ’em up-like levels seeing Mario in a small fighter plane and a submarine. These do a good job at breaking up the action.

Fun Factor: 9
Super Mario Land obeys the same rules set its fore bearers, the twist comes in the unconventional environment, enemies and level design. It makes for an overall refreshing change to a series that we are all accustomed to. Perhaps not “his best adventure yet” as the front of the box puts it but still a top Mario game, worthy of your attention.

Graphics: 9
Minimalistic but there is a charm to the brief animations and trim characters. There are enough graphics in each environment to justify the theme set. Otherwise it is essentially a monochromatic Super Mario Bros.

Audio: 9
As expected from the early handheld hardware; limited number of short loops. Each one of them has as much personality as you can get out of such simplistic tunes. The sound effect for when you attack bosses is ear tearing though.

Ingenuity: 8.5
Some new tricks to the proven formula, such as how Mario can ride boulders to navigate over spike ladened floors or how fireballs bounce off walls. The more life-like environments bring a refreshing change and should be applauded.

Replay Value: 8
Depends on your experience with the 2D Mario games I guess. There is a harder difficult on the second playthrough and after that a level select opens up, so it’ll take some practice to get that far. While the game can be completed in less than an hour, it’ll take roughly a good five or six to learn all the tricks.