Disgaea: Hour of Darkness: “Remind the netherworld just who is next in line to the throne. Laharl awakes from a long slumber to discover that he must fight to claim his rightful title as Overlord and bring order back to the netherworld.”

Story:
Prince Laharl awakens from a two year nap to discover that his father, King Krichevskoy (the Overlord of the Netherworld) has died and the rest of the Netherworld has forgotten him in the ensuing struggle for power. With his faithful(?) vassal Etna and her squad of Prinnies, Laharl sets out to take his rightful title of overlord making the most unusual allies in the process. Episodes play out a little like an anime, complete with a “In the Next Episode” section hosted by Etna. They play on TV references and usually have little to do with the actual next episode. The real twist of this tongue-in-cheek tale is that instead of setting out to vanquish evil, you play as an evil overlord leading an army of demons as the story playfully explores the nature of good and evil from this inside-out perspective.

Watch the Disgaea: Hour of Darkness trailer featuring the Tsunami Bomb song “The Invasion from Within”.

Mechanics:
The basics of the game will be familiar to any Strategy RPG veteran. Play is turn based with the player deploying a team of demons from a base panel. The map is broken up into a grid with each unit taking up one square. Elevation and directional facing are important, as attacks from behind a unit or from a higher elevation are more powerful. So far this is mistakable for any other Strategy RPG. Now, for a look at what sets the game play apart…
Whenever a unit attacks an adjacent enemy, it has a chance to bring any adjacent allies with it for a Team Attack. A chain can be set up of attacks or special moves that can all be executed at once. When sequential attacks are performed on a single character, they form a Combo which lowers the enemy’s defense and makes all subsequent attacks more powerful.
A humanoid character has the ability to lift a unit and throw them. This can be used to cover distance on the map quickly, or to throw enemies into each other. Throwing enemies into each other adds their levels together, making one much stronger enemy. Players must be careful when Prinnies are thrown (Prinnies are monsters that look like penguins but have human souls inside), they explode. Monsters don’t have the ability to Lift and Throw. Monsters thrown into the player’s base panel will fight with all the characters still within it. If the monster is defeated, it will be captured and can later be used on the player’s team. If the monster is not defeated, it will destroy the base panel and all the characters inside will die. Fortunately death isn’t that big of a deal in the underworld. Simply go to the Netherworld Hospital to heal or resurrect any allies between battles.

Leveling in the game begins to show the over-the-top nature of the game (more so than the excessive use of explosions). Where most RPGs have a level cap of 99 for characters, Disgaea has a level cap of 9999. Characters can also be Transmigrated. Transmigrating returns the character to level one but makes the character stronger based on its former level. Stat increase is based on a growth percentage so a slightly stronger level one character will become significantly stronger at higher levels.
There are a few other ways characters level, as well. First, skills have levels that increase with use, making the skill stronger. Also characters have weapon mastery which increases whenever a weapon of the appropriate type is used. As the weapon mastery raises, the effectiveness of the weapon increases and the character learns various weapon skills.

Characters also have 4 slots to equip weapons and armor increasing the character’s stats. The equipment can be strengthened through the item world. The player can go into a random dungeon inside an item to make it stronger. Each map passed in the item raises it one level, making it stronger. While common items may only reach level 30, Legendary items can go all the way to 100. Players have a chance to exit once ever 10 floors, or with an item called Mr. Gency’s Exit. Equipment may also be powered up with Specialists. Specialists can be placed in slots within the equipment to boost stats, increase elemental resistances or give other bonuses. 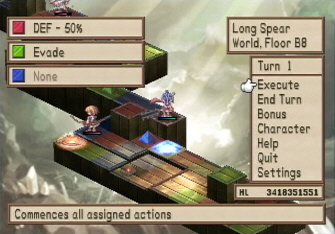 Maps have one other strange feature that must be paid close attention. Geo Panels are colored tiles which are spread randomly on maps giving unusual effects to units standing on them. These effects include healing or damaging characters, boosting or weakening, warping characters around the map, or even creating an enemy clone of a unit. The sources of these effects are Geo Symbols. The Geo Symbols will start a Chain when destroyed, turning the square it sits on (and every other tile of that color) into its own color. This chain will damage units standing on an affected tile and destroy Geo Symbols. These destroyed Geo Symbols will continue the chain. A clear Geo Symbol will erase affected tiles instead of changing their color. In this way, it is possible to remove all Geo Panels from a map. Large Chains give a dramatic boost to the bonus gauge for the map. The Bonus Gauge increases with any attack, but especially from Combo Attacks and Geo Chains. Each rank on the Bonus Gauge (up to 10) will give the player a prize when the map is cleared. Prizes include money, experience and items.

There is one final feature which really sets this game apart in its field. After the final boss is defeated, the game is finished and the ending has played, the player is given one more option. New Game+ allows the player to start from the beginning with all the characters, equipment, money and levels the game was finished with. Story characters will become available again in the same state the left, but not until that point of the story is reached. Because tearing through a bunch of level one characters with a team ready to challenge a final boss isn’t much fun, the good folks at Nippon Ichi have included two helpful bills in the Dark Assembly: Stronger Enemies and Weaker Enemies. This allows players to adjust the games difficulty appropriately, and as they see fit. Also, the game can be beaten reasonably at level 70 (give or take, depending on player skill and equipment strength) but provides a great deal of challenge with optional bosses and post game battles. 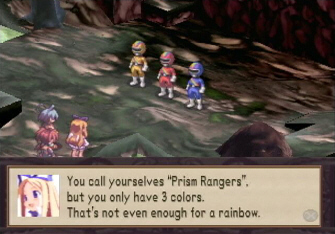 Fun Factor – 8
The game has a fun and quirky plot that is also able to take itself seriously long enough to tell a good story. The mechanics of the game, much like the story, are silly and over-the-top, but also deliver great game play that doesn’t take itself too seriously. A variety of generic characters as well as story characters that can be built and customized until the player’s heart is content. The game is also quite balanced but can (like most RPGs) be easily broken by leveling. Unlike most games, this can then be remedied by making the enemies stronger to match.

Graphics – 8
Graphics for this game are on par with most games in the genre. Characters are hand drawn 2D sprites displayed on a 3D map. While beautiful for what they are, many players expect games to push the limits of a system’s graphical capabilities. Few games in the genre will ever be accused of doing that. For players who expect games should be rendered in 3D, this category will probably score about a 3 instead. Players who love board games and old-school RPGs will feel right at home with this game.

Audio – 9
The music in this game is beautiful and is always appropriate for setting the tone and mood of the areas. Dialogue is voiced over, and can be set to English or the original Japanese voices. The voices are well done in both languages. Also, the sound effects are perfectly suited to actions. Over all, there may be room for improvement, but the audio in the game is nice and does everything it is expected to.

Ingenuity – 8
Nippon Ichi took the successful system from La Pucelle Tactics and Improved on every feature. They also changed a few features to reflect the satire of the story, such as the usual level cap of 99 being changed to 9999. The unique character building, along with the unprecedented satire plot, make Disgaea a game that really stands out in the field.

Replay Value – 8
The replay value of this game exceeds that of normal RPGs by a great deal. The New Game+ feature allows players to easily reach the multiple endings, and rewards them for doing so. The many post-game levels also give players something to strive for after the regular story is beaten. Also the extreme leveling ability gives hardcore games an unusually impressive maxed character to strive for.

Appeal…
First, players looking for truly impressive graphics will be put off by this game. Second, players looking for a difficult strategy game will not find it here. The game is approachable for any gamer, but it will especially appeal to a few types: the hardcore gamer (plenty of leveling and powering up to go around), fans of Strategy RPGs in general, fans of Satire and humor in general.