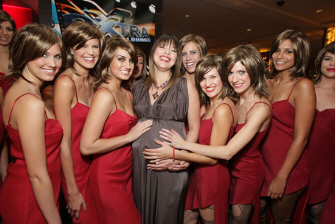 Question: Are We Going To See An Army Of Alices?
Answer: We’re in very early discussions about all of it, so it’s not a definite thing by any means. Mila would like to return, and I would certainly like to see the franchise continue. Last year there were, I think, eight ‘threequels’ got released. Rush Hour 3, Pirates 3, Spider-Man 3…but there was eight of them. Shrek 3. Six out of the eight, the third movie did worse business than the second movie. There were only two where the third movie did better than the second movie. That was Bourne Ultimatum and Resident Evil. So, you know, it is quite an achievement for a franchise to keep growing like that, and we all feel that the audience is excited to see another one clearly. We would like, if we could put it together, we would do it.

Question: Right, but hypothetically how would you go about using all of those Alices?
Answer: I’m not going to tell you that. [laughs]… but we would.

Question: You would?
Answer: We would, yes. Absolutely.

Filming is said to take place in Toronto (filling in for Alaska) and Tokyo (naturally as Japan).

Additionally a studio insider claims that Sony is looking to get Resident Evil 4: Afterlife into theaters by September 17th, 2010.

By the end of the month director/producer Paul W.S. Anderson confirmed: “I always envisioned Resident Evil as a trilogy of films. And we’ve been very lucky where it’s a trilogy where the audience has built and built. I wanted to kick off a brand new trilogy. I’m really excited we’re doing it [in 3-D] and we’re using the same camera system [James] Cameron used for Avatar. There are a lot of exciting things about this one. I don’t regard it as Resident Evil 4, I regard it as a re-tooling and rebirth of the entire franchise.”

Thanks for the tip Mike. Pic via Bloodydisgusting