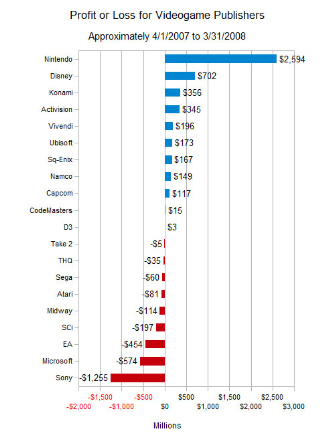 Edge has put together their list of the Top 20 game publishers. The exhaustive list goes into some insane detail, so it’s definitely worth picking up the magazine to check out the feature.

Here are some very interesting numbers taken from the article. The chart at the top reveals the profits as well as the losses for all of the biggest video game companies. As you can clearly see, Nintendo is, quite simply, SWIMMING IN POOLS OF MONEY ala Scrooge McDuck from DuckTales.

Below you will see another chart that shows the Global Revenue for each of the various video game publishers. As you can see, it paints a drastically different picture than the above chart. But once again, Nintendo is rolling in the dough and seem quite unstoppable at this point. 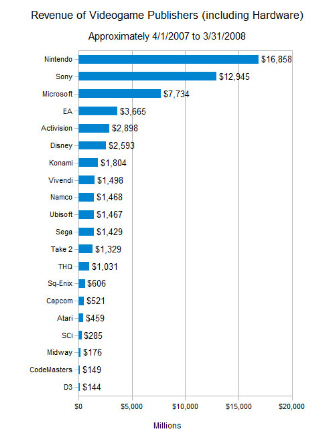 Speaking of Nintendo, they just released their Q1 2009 financial results. This report reveals how much units they’ve managed to shift over the various consoles lifespans as well as how much hardware they sold between April and June of 2008.

The chart shows that the Wii is continuing on it’s juggernaut-like domination, while the DS handheld has had a slight downturn, although it’s a very small one really as the system went from 6.98 million sold this year compared to 6.94 last year. Wii sales are up from last year from 3.4 million to, well, a lot more! Behold the chart!