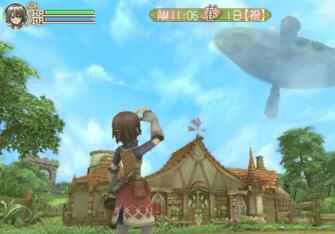 From the creators of Harvest Moon and Rune Factory for the DS comes the first installment of a Rune Factory RPG for a home console (in America and Europe). Developed exclusively for Wii, Rune Factory: Frontier features stunning graphics and takes full advantage of the Wii’s unique controls to fully immerse players in the Rune Factory universe.

Rune Factory: Frontier incorporates an open-ended structure that allows players to choose the type of game they wish to experience. Whether it’s growing crops, expanding the town, fighting (or befriending) monsters or even falling in love, the experience is unique to each player. Rune Factory: Frontier Wii is scheduled for release Q1 2009.

In Rune Factory Frontier, you play as Laguna, who’s starting life in a completely new land. Your goal is to build up your village in classic Harvest Moon style (Rune Factory is an offshoot of that series), attracting new residents, and eventually earning the affections of some possible marriage targets.