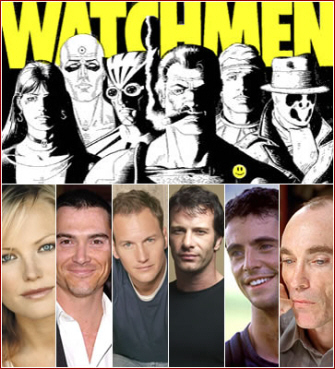 Watchmen video games are coming based on the 2009 film of the critically acclaimed graphic novel, but not in the form you may have expected.

Warner Bros. will be handling the games and they’ve decided to go episodic, that way they can get out a quality-worthy game in a shorter time period and yet continue to release new games when/if the movie is a hit.

To quote Warner’s Samantha Ryan, “Rather than the more traditional ‘time is limited [so lets] squeeze the puppy onto the market’ route, we wanted to craft something that’s the best possible game it can be.

So Deadline Games will be developing two episodic titles, one due for release at the same time as the film, the second when it’s released on DVD. If they perform well, the rest will follow.

And don’t worry about the games being cheap just because they are going to be released on Xbox Live Arcade and Playstation Network, Ryan says, “graphics look as good as any traditional PS3 or 360 game sitting on the shelf at retail.”

As far as the actual prequel game is concerned, little info is known except that it will be a “brawler”, and that two of the selectable characters are Night Owl and Rorsach (although we’ll assuredly see Doc Manhattan and The Comedian as well).

Here is the trailer for the Watchmen movie if you haven’t seen it yet: