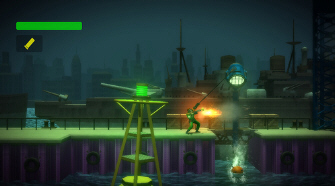 But for those who were thinking about getting the Xbox 360 version, you may wanna change your mind, as exclusive new features have been revealed for the PS3 version that are worth taking a look at.

The biggest addition is Remote Play! Remote Play allows you to play your PS3 game of Bionic Commando: Rearmed from anywhere using a wireless Internet Connection. According to the developers, the game looks quite nice on the PSP’s screen, since the classic side-scrolling gameplay fits well on a handheld. They also said the feature wasn’t easy to add, and they had to come up with some creative ways to re-work the controls to work with the PSP since it lacks a second control stick.

The PS3 version of Bionic Commando: Rearmed will also feature Dualshock 3 support for rumble capability. In addition, the developers said there is one more surprise for the PSN version that they are still keeping underwraps. I’d be surprised if it was something other than Trophy support, but we’ll have to wait and see.

Check out this trailer showing the evolution of Bionic Command from the old-game to Rearmed, followed by a newer trailer for Bionic Commando: Rearmed.