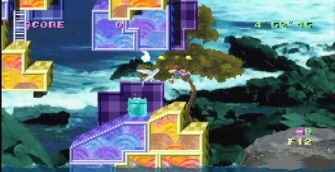 Yumi’s Odd Odyssey is a fast-paced puzzle platformer for the PSP.

Trapped in a bizarre world filled with spikes, pitfalls, and giant, hostile fish with nothing but her wits and her trusty rubber fishing line, Yumi will have to run, jump, climb, and swing her way to freedom. Yumi’s fishing line isn’t just handy for fending off fish-it also works like a grappling hook, allowing Yumi to latch onto and swing from just about any part of the environment. The game’s advanced physics allow players to pull off remarkable feats of grappling acrobatics and find new, creative ways through the open-ended levels.

According to developer Natsume: “With its colorful graphics, wild worlds, and ingenious grappling gameplay, Yumi’s Odd Odyssey will have players hooked.”