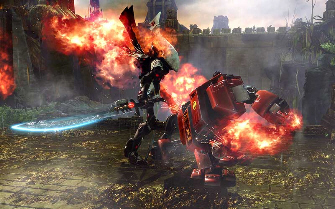 Warhammer 40,000: Dawn of War 2 is full sequel to 2004’s bloodthirsty sci-fi real-time strategy game, set in the Warhammer 40K universe. THQ released a new cinematic and gameplay trailer for the game that confirm the following races are in the game: the Space Marines, the Orks and now also the Eldar. There’s even a hint that another race will be unveiled later on, maybe the Tyranids? We might have to wait until early 2009 to find out for sure.

The battlefield holds a surprise around every corner. Watch the cinematic Dawn of War 2 trailer.

Space Marines and Orks, make room for some new battle-mates in this gameplay trailer.