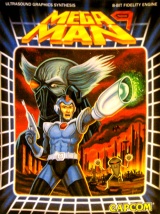 The Blue Bomber finally returns in this ninth chapter of the original franchise in NES old-school style for the WiiWare, Xbox Live Arcade and PlayStation Network download services at a price of $10 in September 2008. In Mega Man 9, Mega Man’s creator Dr. Light is blamed for a robotic rampage and Dr. Wily himself has no apparent connection to it — to the point of even showing a video of Dr. Light declaring world domination and Dr. Wily refusing to follow him — announcing that he needs donations to complete the robots he created to combat those of Dr. Light. Mega Man must fight to prove his creator’s innocence and expose Wily’s true intentions.

At E3 2008 two challenging levels from Mega Man 9 were on display in Capcom’s booth. Watch the level 1 demo: