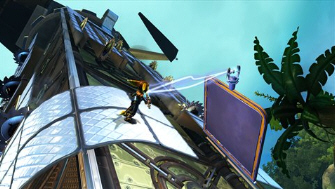 In Europe, Ratchet & Clank Future: Quest for Booty will be available on Blu-ray disc for PS3 as well as for PSN download.

The game will be released worldwide on September 30th and will cost $14.99. Quest for Booty continues where Tools of Destruction left off and it will feature some all new gameplay elements. The story follows Ratchet’s quest for Clank (captured by the Zoni in Ratchet & Clank Future: Tools of Destruction), who will get help from characters like Talwyn, who appeared in Tools of Destruction. Since Quest for Booty will be a downloadable game, it will be shorter and cheaper than usual. It will have 4 levels and about 4 hours of gameplay.

The gameplay will feature more puzzle solving than platforming and Ratchet has a few new abilities, including an electrified wrench that he can use to pick things up and activate other objects in the environment (like platforms that can be lowered or raised).