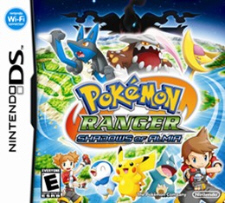 Nintendo released the first trailer from Pokemon Ranger 2: Shadows of Almia for the Nintendo DS and announced the title has been given a release date in America on November 10th, 2008.

It’s the sequel to a unique action-adventure series that features a fun, different way to capture Pokémon with the Nintendo DS stylus, which controls an item called the Capture Styler in the game. Players circle the Pokémon they want to catch by drawing circles around them on the touch screen. When you complete certain Quests, the Ranger Union awards you with power-ups, which add new upgrades and functions to your Capture Styler, allowing you to advance as you work to eventually become a Top Ranger.

Run across the world with all your Pokemon friends.