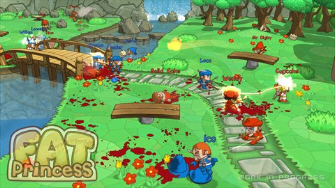 At the Sony E3 press conference Fat Princess was one of the new PlayStation Network-exclusives briefly shown. Fat Princess is a 32-player medieval Hack ‘N Slash action game with a cel-shaded look. Fat Princess pits two hordes of players against each other in comic medieval battle royale. Your goal is to rescue your beloved princess from the enemy dungeon. There’s a catch though: your adversary has been stuffing her with food to fatten her up and it’s going to take most of your army working together to carry her back across the battlefield.

You can switch between five different character classes literally at the drop of a hat: the fearless Warrior, the steadfast Archer, the mystical Mage, the tireless Worker, and the deadly Priest. In order to triumph, players must combine their skills and work together. The name of the game is cooperation, whether it’s helping another player drag a log back to your castle, manning a battering ram to smash through the enemy’s front gate, or building a human pyramid to scramble over the walls.

Main features in Fat Princess:
* Casual Single & Multiplayer Online/Offline Action – Cooperate with your team of medieval soldiers (up to 16 players on each side) to overthrow the opponent’s army, plunder their castle and save the princess
* 5 Character Classes – Change your avatar’s character anytime by swapping hats: Worker, Warrior, Archer, Mage and Priest
* 10 Unique Maps – There will be 10 maps total, shared across single & multiplayer modes
* Experience intense frantic gameplay across diverse, charming and challenging environments
* Resources & Upgrades – Work together to collect resources to upgrade your primitive weapons and basic castle defenses into superior armaments and impenetrable fortifications
* Unique Game Modes – Select from several various game types: Rescue the Princess, Thwart the Invasion, and Medieval Games
* 32-player Online Skirmish – Jump in and join as many as 32 players online to wreak havoc on the battlefield and carry your stout princess back home during the conflict

Save an obese regal woman on PlayStation Network.