BioShock PS3 will get new scenarios as downloadable content. First gameplay video out 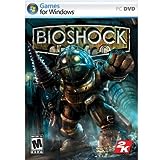 Bioshock has been revealed to be heading to PS3 as you may have heard. And at E3 2008 we finally got some details on what will separate the PS3 version from the Game of the Year Xbox 360 and PC releases.

BioShock for PS3 will feature exclusive Downloadable Content in the form of puzzle scenarios that will take place outside of the main game, accessible via the main menu.

These additional puzzles are set in an arena-type setting that is designed to look like Rapture. One scenario involved a little sister stuck atop a Ferris wheel that needs to be rescued. How you do so is by first hitting the control box with the shotgun’s electric buck, which causes the Ferris wheel to move, lowering the Little Sister a bit. To get it to move more, you must find a booby-trap room that features an electric crossbow inside a safe. You then shoot the control box with the crossbow and cut the line to give it a charge. This causes the Ferris wheel to move a bit more. So the solution is to use every electric item that you can find, each one will make the Ferris Wheel move a bit more until the Little Sister is safe.

That was just one example of the type of puzzle scenarios that you can expect. Pricing or release dates have yet to be announced.