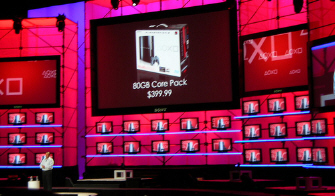 The Sony E3 2008 press conference was held today and showed off a ton of new footage and some new game announcements for the PlayStation 3 console and PSP handheld.

* Resistance 2: Fight against gigantic, 300 foot tall Leviathan enemy/boss. Gets picked up and shoots it in the mouth… Climbs inside building and runs up flights of stairs. Reaches walkway which is broken behind him as he runs from monster. Goes down flight of stairs. Goes outside through broken window. Is picked up, shoots him in the mouth but then is thrown. It shows him flying through windows to another building. End of demo. The FPS breaks new ground with 8-player co-op, 60 player competetior multiplayer modes and community features. Truly delivers scale. HUGE bosses in both single and co-op. Expansive environments. Giant chimeran warships you can board around the country.

* LittleBigPlanet will be coming in October 2008.

* Ratchet & Clank Future: Quest for Booty for PS3 is diving into Clank’s disappearance. $14.99 price point on Playstation Network. Shorter game at lower price, same high intensity, action, suspense, mystery, humor. Begins where Tools of Destruction left off to find Clank. It’s a “new concept” says Brian Allgeier from Insomniac. Graphically it looks as good as the PS3 release. Platforming, exploration and a bit more thinking is required. Wrench head pops up and you get an energy tether to manipulate objects.

* Sony reconfirms PlayStation HOME is coming and once it arrives it will be worth it. No release date announced.

* PlayStation Store will get a Video tab to download movies and TV shows for your PS3 TONIGHT! You’ll be able to buy and rent this video content and even put it on your PSP to make it portable. As you start it’s progressively downloaded to your PS3, so you can start watching the video after a minute of downloading, even when a 2-hour SD movie takes 1 hour to download. You can also download to the PSP via internet/computer.

* Resistance: Retribution was announced for PSP. A trailer claims: “The battle for Europe begins. The Resistance is now in your hands.”

* Batman and Superman artists, Jim Lee, from Wild Storm Productions gave a sneak peak at DC Universe Online was shown for PS3 / PC. The character models in this MMO looks like the Mortal Kombat VS DC Universe fighting game. The video claims: “Make the world your weapon. Crush your foes. And become the ultimate superhero or supervillain. The door to the DC Universe has opened. Now is the time to build your legacy. The time has come. The future awaits. The next legend is you.”

* A PlayStation 80GB Core Pack will go on sale for $399.99 and will be the focus for Sony going into the future. It will have the same functionality of the 40GB model.

* A God of War 3 trailer was shown for PS3 with Kratos saying “There will be only chaos.”

* Sucker Punch’s Infamous was shown with an animated trailer that starts out animated, but also showed the first gameplay footage. Due Spring 2009. “Why did I survive?” says the protagonist, after which he does Force Lightning-style attacks and big rooftop jumps.

The President and CEO of Sony Computer Entertainment of America (SCEA), Jack Tretton, closes the show with “If this is what year 2 of the PlayStation 3 life cycle looks like, imagine what years 3 and 4 can look like.”