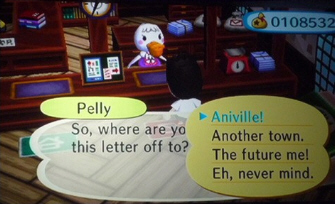 Animal Crossing: City Folk (Wii) is the name of the new Animal Crossing game for the Nintendo Wii from creator Katsuya Eguchi, who presented the game via a pre-recorded video showing the first gameplay footage and offering tons of details from E3 2008 at the Nintendo Pre-E3 Press Conference.

The most surprising new feature of Animal Crossing Wii is the new WiiSpeak Community Microphone accessory that will be sold separately for at an MSRP of $29.99. This microphone allows for rooms of players to communicate with other rooms of players at the same time while you play four-player! So for the first time, online multiplayer chat is available for Wii. Definitely a good thing, but man is it overdue . . . Update: Animal Crossing: City Folk has a release date of November 16th.

Like previous Animal Crossing games, you are free to live and do what you like. There are no required goals, players are free to do things their own way. Which has always been the goal of the series says creator Katsuya Eguchi. All the animals in the game world go about their business even while you aren’t playing. They get up in the morning and go to bed at night, this makes the game feel like you are visiting a realistic world where things don’t only happen when you are there. And like previous games, holidays will be celebrated, and you can see in the video you can even wear Halloween Masks!

The goal with the online-enabled Animal Crossing: City Folk was to create a game where players could communicate with each toher and feel like they are playing together even if they are playing at different times.

The biggest new addition to Animal Crossing Wii’s gameplay is the new urban City area which you can hitch a bus ride to. In the city you can visit a host of new locations, including an Auction House, where you can see items for sale or auction off your own items. There’s also a famous fashion designer named Gracie who you can visit at her store. Then there’s Harriet’s Beauty Salon, where you can change your hair style or even put on a mask including one that changes your face to that of your Mii!

Although you won’t see other players in the City area, you can connect with them via WiiConnect24 and be able to bid on items your friends have put up for auction or visit the Happy Room Academy headquarters where you can see the top-rated players house.

Of course, along with the new WiiSpeak Community Microphone and Nintendo Wi-Fi Connection online-support comes new ways to communicate. Not only can you write letters like in past games, but you can also attach a picture to that letter. The letter with picture can then be sent not only to other players on your Animal Crossing friends list who are either in your town locally or send it to them via the Internet, but you can also send your letter+picture to a friend’s cell phone or computer/e-mail address, or even to the Wii Message Board.

In addition to all this, you can also gain some hints on new gameplay from the E3 video. You can see that items look a lot more interactive, as you can see players interacting with gym items (although it may just be a decorated players house) including the speed and heavy bags, as well as players in a game room that includes arcade machines and a TV. Naturally, all the other Animal Crossing features from past games also return including collecting, fishing, digging fossils, cutting down trees and planting, collecting clothes and talking with town, and city, folk.

Animal Crossing: City Folk will be available this year on Wii. Check the game out yourself in this video from Nintendo’s Pre-E3 Press Conference.