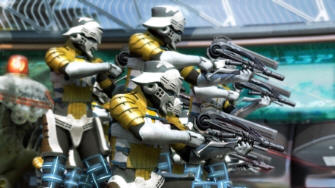 Square Enix has confirmed at the Microsoft Pre-E3 keynote address that they will bring Final Fantasy 13 (Final Fantasy XIII or FFXIII) to the Xbox 360, aside from the PlayStation 3 version.

No other details for the game were announced but it’s reasonable to expect that the game will launch the same day as the PS3 version.

A beautiful trailer for the game was shown and we hope to have it up as soon as possible.

Update:
Check out the beautiful trailer yourself below! Looks very nice to me, even though I’m still skeptical about how the gameplay will turn out. I also spotted Shiva & Ifrit! By the way, the trailer says “Japan PS3 only” meaning that Final Fantasy XIII is coming out for Xbox 360 ONLY in other regions like North America and Europe.