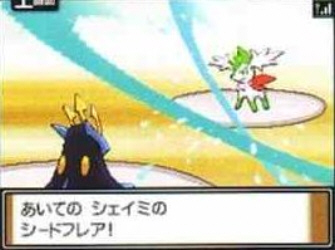 The latest issue of Japanese gaming magazine CoroCoro has revealed new features that will be in Pokemon Platinum on Nintendo DS when the RPG gets released in Japan on September 13th, 2008, and in 2009 in the rest of the world.

* You have to face Team Galactic once more, but it seems their plans and HQ have been stepped up a fair bit. New characters include a new member of Team Galactic and an international police force (Interpol) who are hunting Team Galactic.
* The Battle Frontier returns and takes place in the Fight Area in Sinnoh. There are different areas in the Battle Frontier, their battle quirks are not yet known. However, it does still contain the Battle Tower.
* The Wi-Fi area has been enhanced with various areas, which support up to 20 people at any one time.
* The Poffin making has taken a step up and has a new feature that involves a Swalot-shaped machine. You essentially throw berries into its mouth. This can be done over Wi-Fi in the new Wi-Fi area.
* The Battle Recorder, an item that allows you to record battles that you hold, and share them with your friends. This is done at the new and improved GTS in Jubilife City, which has a bigger global terminal.
* In Floarama Town you receive the Flower of Glacidea, which you can use on Shaymin, then Shaymin’s secret form changes procedures. — Shaymin changes from Land form to the Grass / Flying type Sky form. Ability is Serene Grace, which is more focussed in Speed and Special Attack and knows the move Air Slash. (In Japan gamers can receive Shaymin via Wi-Fi for Pokemon Diamond / Pearl in movie theatres.)
* Giratina’s Origin form can only be used in the Torn World (like in the Pokemon movie) and it’s in another form somewhere else. It’s unknown if there will be an item to use to keep it in its Origin form, but the main method will be revealed next month. — Giratina’s Origin form ability is Levitate.
* There will be new sprites for each Pokemon, including Bidoof, Giratina’s Another form, and Shaymin’s Land form.