Mega Man 9 has been confirmed for release on WiiWare, Xbox Live Arcade and Playstation Network! The all-new 8-bit Mega Man that mixes old and new was originally thought to be a WiiWare exclusive, but we’re happy to report that it will indeed be coming to all three next-gen consoles’ downloadable marketplaces. It’s really the best for everyone, now no one will have to miss out on Mega Man’s return to 8-bit glory!

Check out this debut trailer for the Blue Bomber’s 9th outing and be sure to thank the Capcom gods! 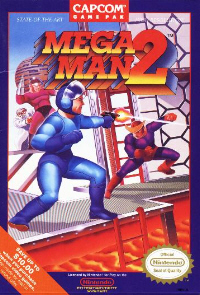 In addition, Capcom has confirmed that Mega Man 1 and Mega Man 2 will be coming to the Wii Virtual Console soon! Let’s hope that we will eventually see the entire series available for download to our Wii!

In case you are new to the series, the story of Mega Man begins in the year 200X, as the advanced science of the era has created industrial robots that co-exist with humans. The evil Dr. Wily, however, plots for world domination and creates his own robot army to take over mankind. But Dr. Light outfits one of his domestic robots “Rock” to fight Dr. Wily’s creations. This is how Mega Man is born.

Mega Man 9 is set after the events of Mega Man 8. Multiple riots have sprung up all over the world. Whilst many people suspect that this is another plot from Dr. Wily, Dr. Light is stunned to recognize that some of the robots rioting on the TV screen are his own creations. Even more stunning, Dr. Wily appears on television to proclaim that Dr. Light is the evil mastermind behind these latest catastrophic incidents and it’s up to Mega Man to clear his creator’s name.

The title plays like a classic Mega Man effort with some notable additions. Of course, the character designs are again created by Keiji Inafune, who concocted the look of the franchise. Mega Man 9 features 50 new enemy and bosses to battle, according to Capcom. And it will also sport an online leaderboard ranking system where you’ll be able to track your score and time against other gamers.

Expect more info and video of Mega Man 9, including video of the PS3 and Xbox 360 versions, very soon as E3 2008 rolls towards us.