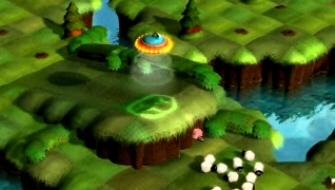 Capcom has announced Flock for release on the Playstation Network, Xbox Live Arcade and PC.

In Flock, farm animals of all different kinds have been disappearing into thin air due to a mysterious alien force (X-Files anyone?). The twist? Us, the players, are the ones responsible for the sheep-napping! The whole idea behind Flock is that players have to find a way to manipulate herds of different farm creatures from one spot on the map towards our giant mothership, which lays in wait to pick them up. We do so by controlling a traditional, 50s-era-style UFO.

The mechanics are pretty simple and not too complex: There are four different kinds of animals to collect in each stage — cows, pigs, chickens and sheep — and, like Lemmings before it, no one group of animals can be herded into your UFO in the same way as the others. To accomplish this you use the craft’s multi-purpose death-ray. The flock needs some motivating, you see.

Pushing the “Beam” button and maneuvering your ship in just the right place is what playing Flock in the early going is all about. Equipped with both tractor and depressor rays, players can frighten different critters around the screen by pushing and pulling on the animals and environmental objects around them. So while the first stage may only require you to activate a beam behind most strategically-placed bovine targets to get them moving, the next levels may require you to use your tractor beam to pick up and move fences or other obstructions so that your animal of choice can get where they need to.

The animal’s type affects the different kinds of things they’re capable of during their trek as well. Sheep, for example, may come to an area where they’re simply too wide to fit — but get them wet, and they may shrink to a small enough size to fit through the impasse and continue on their way.

But just frightening a bunch of random animals and getting them into the mothership isn’t as easy as it sounds. Each stage takes place on an island surrounded by water, and once a critter falls into the ocean it’s done for. Like Lemmings, players have to meet a specific quota of animal in each level, but this time, have to contend with independent AI behaviors of the creatures they’re chasing. Mix in a limited Boost meter that restricts how often you can zip to the rescue when they’re in danger and the aforementioned environmental hazards, and you have yourself a challenge (and some of the later levels really are challenging because of the sometimes-frustrating decisions your targets make).

Check out the graphically impressive Flock (in the video above), who’s development team includes people that worked on Donkey Kong Country, Medal of Honor, Crackdown, and Lemmings.

When completed, Flock will have over 50 different levels, a simultaneous two-player option, and the inclusion of the same map editor that the designers used that will allow players to create their own playfields from scratch! And hopefully downloadable updates will also be in the cards, as the developers haven’t ruled it out. Already it’s looking like this game will outlive the length of your typical downloadable title. — Via IGN