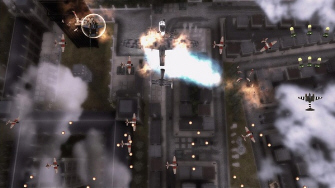 The classic top-down arcade shooter is re-imagined in this remake, taking influence from the 80’s 194X series of WWII-themed vertical shooters; maintainging the classic art, sound and gameplay that you know and love but utilizing a fully 3D graphics engine to put the game into the modern HD era.

The world in which 1942 takes place is not our own and the events that transpire are not historically accurate, nor are they intended to be. This is an alternate world where history and technology developed along their own paths. As a result, players will jump into the cockpits of WWII-era aircraft to take on huge waves of incoming enemy fire, dodging explosions and missiles while challenging huge bosses at the end of each stage. New co-op “Joint Strike attacks: combine the powers of two aircrafts into a devastating barrage.

The new 1942: Joint Strike features 2-player online cooperative play. Graphics and music have been similarly updated by Backbone Entertainment. There’s also a brand new score for the game created by Norihiko Hibino, an international composer well-known for his work creating music for the Metal Gear series.