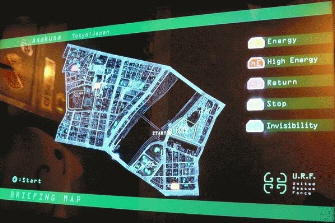 Sony trademarked The Last Guy a while back and now it’s turning up in Japan as a downloadable game for the PS3. Looking at the teaser site it seems to be another quirky PlayStation Network title with a unique art style.

It’s said to be a rescue game where the player is expected to guide people and VIPs through a city to a safe zone while avoiding obstacles within a time limit, in exchange for points. Zombies are trying to tear apart the world. The game uses Google Earth to render high-res real world environments for the game. Powerups include energy restoring and invisibility. The ESRB 10+ rating for this game mentions it will contain the following: “Alcohol Reference, Mild Suggestive Themes, and Mild Violence.”

The development team sheds a little light on this upcoming game for the PlayStation Network. Too bad I don’t understand a word or I’d explain what it’s all about, all I know is that it’s being made by three guys and a goat.