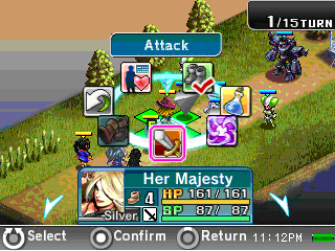 Square Enix has released Song Summoner: The Unsung Heroes on the iTunes Store worldwide. The strategy-RPG is available for play in English and Japanese on the iPod nano with video, iPod classic and fifth generation iPod (and presumably iPhones).

Song Summoner: The Unsung Heroes is a Role-Playing Game that transforms your iPod songs into powerful “Tune Troopers” that you can control in battle. As the protagonist Ziggy, you will embark on an epic journey to rescue your brother from the clutches of the Mechanical Militia. Intriguing characters, an epic story and a tactics-based battle system combine for a rich RPG experience previously only available on home and handheld game consoles.


ALL FACTS LINED UP:

Story:
From the days of old, Melodica was a land of music, a land of freedom. The people sang, played and danced to the music they so cherished. Until one day, they came— the Mechanoids, who enhanced their bodies with machinery. Those who were tempted by greed and power willingly gave away their souls for bodies of steel, forsaking their humanity to become cold, emotionless automatons. Now, they seek to destroy all that do not embrace their way of life.

But there is hope on the horizon. There are those who are fated to stand against the tyranny of the machines— the Superstars, who can turn sound into lethal weapons, and the Conductor, also known as the Song Summoner, who can summon powerful warriors born of music. In their most desperate hour, Melodica awaits the arrival of their new Song Summoner…

Game Features:
– Transform your iPod songs into “Tune Troopers” to combat the evil Mechanical Militia.
– Tune Trooper types and abilities are determined by the songs used to create them.
– Your Tune Troopers can be powered up even outside of the game–just by listening to the songs you used to create them!
– Control Ziggy, a “Conductor” that creates warriors out of music, and guide him through his journey to save his brother Zero from the Mechanical Militia.
– Experience a turn-based tactics battle system, divided into player and enemy phases where each side takes turns manoeuvring their forces.
– Deploy the right troopers at the right time, and use contraptions found on the map effectively to achieve victory in battle!
– The iPod Click Wheel allows players to play the game as easily as selecting music.