Robocalypse is upon us with DS RTS action in October 2008 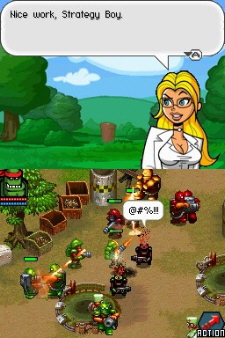 Developed by Vogster Entertainment, Robocalypse is an innovative, new, real-time strategy game for the Nintendo DS. Featuring robotic armies equipped with unique weaponry, Robocalypse offers deep strategic warfare and a twist of humor. Robocalypse will be published by Tecmo in October 2008.

A technological breakthrough for the Nintendo DS, Robocalypse features over 50 A.I. driven units with advanced distributed path-finding, dynamic music and stunning 3D particle effects. Supporting these advancements is a hilarious storyline penned by Jay Lender, a writer and director for the acclaimed cartoon series SpongeBob Squarepants, and Micah Wright, known for his writing contributions across multiple mediums.

What do a geeky scientist, a damsel in distress, and a bunch of WWII vets have in common? They are all characters in the new RTS for the DS! Watch the Robocalypse debut trailer to find out.

• Robots with Attitude: Create an army by choosing from a multitude of different robot units with specialized skills and weapons that gain power as you destroy the enemy.
• Wacky Weapons: Over 20 groundbreaking weapon types with spectacular visual effects, including; Converter Cannons, Falling Anvils, the Head-Crack’n Gauntlet and Digitizers.
• Total Stylus Control: Simplified controls and innovative Action Flag system reduces the complexity of commanding units. No buttons – just point and tap.
• Multiplayer Mayhem: 2 to 4 multiplayer wireless DS multi-card play – play head to head or co-op with unique maps and multiple play modes, then track your progress in the Hall of Fame.
• Heroes Win the War: Courageous Heroes embody powerful abilities and can be controlled directly in combat. Rampage Mode, Conversion (turn enemies into refrigerators) and Leadership (unite soldiers into a single fighting unit) are just a few of their supreme capabilities.
• Epic Storymode: Military routines are accidentally installed into prototype robots, turning them into hunter killers. Disaster ensues and to save humanity, a new batch of robots is implanted with the brain scans of retired WWII vets, giving rise to an oil-swilling, brawling, robotic dirty dozen. Campaign includes 17 unique missions, hidden objectives and a robust reward system.