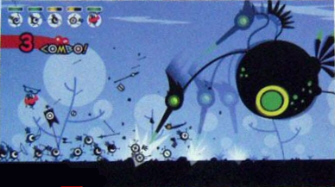 The latest issue of Japanese gaming magazine Famitsu has revealed Patapon 2 for PSP. Like the first Patapon music-rhythm game, the sequel is in development at Pyramid and is produced by Sony’s Japan Studios, it will be released in Japan this winter.

The Patapon 2 interview scan shows designer Hiroyuki Kotani has drawn up some new troops to march to the beat of your drum. He told the magazine: “We had been thinking about a sequel ever since we were working on the overseas version of the original. I wanted to make a sequel, and I was thinking about how best to go about it. We had a few different directions in mind when [SCE producer Junichi] Yoshizawa finally ordered us to make a multiplayer game in the Patapon universe.” That’s right, four-player ad-hoc multiplayer has been added!

1UP translated how the multiplayer works: “In Patapon 2’s single-player story mode, you’ll occasionally come across giant eggs — some of which contain helpful items, some of which hold smaller eggs inside. In order to hatch these suckers, you’ll have to team up with other players and navigate a special enemy-laden multiplayer battleground, using the traditional pata-pata-pata-pon drumbeat to heft the egg forward and defending it whenever monsters loom nearby. Once you arrive at the special egg-hatching altar at the end of the field, all four players will perform a hatching ceremony, a sort of tribal drumline where everyone has to match their rhythms together to crack open the egg.”

The creator Mr. Kotani added “That’s where the Hero Patapon [a central unit to your Patapon army] come in. [The Hero Patapon] are strong, but the enemies are just as strong this time. There are lots more bosses and midboss-type enemies this time. We’ve got about double the amount of content to explore, just in terms of the number of stages alone. Add the customization options to that, and to be honest, you may never get to fully explore every bit of it.” — Pictures via PSPworld