Microsoft Bringing It Home from E3 2008: Starts with Too Human demo 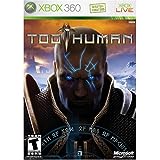 Microsoft has announced that its “Bringing it Home” E3 initiative will start up this year on July 14. Through Xbox Live, gamers will be able to download various content from E3, including game trailers, news from the show floor, interviews, gamerpics, themes and demos, as they have done for past Microsoft Bringing It (E3) Home features. This effectively brings the show to you and all Xbox 360 fans who may not have a computer handy, want to watch the action on their TV screen or are simply casual gamers who would otherwise miss all the fun news and announcements. Of course, since it’s Microsoft and the Xbox 360 that means that you won’t be getting anything related to Nintendo or Sony.

But the most exciting part of this announcement includes the long awaited Too Human demo! This is the demo that Silicon Knights has promised would come out before the Too Human‘s launch this August. Make sure to keep your eye out for the demo so that you can be the first on your block to try out one of this years most anticipated games.