Harvest Moon: Island of Happiness for DS and Harvest Moon: Tree of Tranquility for Wii celebrate the series’ 10th anniversary 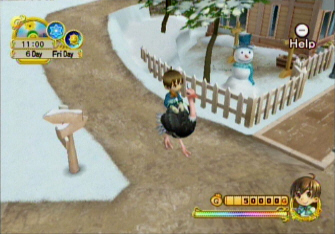 Natsume announced they are celebrating the ten-year anniversary of its popular Harvest Moon franchise this summer. In commemoration of the anniversary, Natsume is launching two new Harvest Moon titles later this quarter and offering a host of retail promotions surrounding the launches.

Harvest Moon: Island of Happiness for the Nintendo DS and Harvest Moon: Tree of Tranquility for the Nintendo Wii will both be available at retail later this summer, and will be branded with special packaging marking the 10th anniversary. In addition, a line of collectible plush toys featuring the cute and friendly animal characters from the games will also be available as a pre-order bonus/gift with purchase at select retailers. Other special promotions surrounding the anniversary include an exclusive 10th anniversary Harvest Moon DS Lite Kit (with protective cover, stylus, screen wipe and more) and two new strategy guides from BradyGames.

In Harvest Moon: Tree of Tranquility for the Nintendo Wii, you find yourself in a troubled island town which once prospered with life and energy, but is now in serious trouble. The mystical Mother Tree that once watched over the island has disappeared, and the Harvest Goddess is nowhere to be found! The island has lost its connection with nature and the inhabitants don’t know what to do – it’s up to you to save the island! You must help to rebuild the island by tending to the earth, befriending and raising animals, nurturing friendships, and creating a family. When the giant Mother Tree is reborn, the Harvest Goddess will return and bring prosperity to the island once again. Long-time Harvest Moon fans as well as new players will find an exciting, involving storyline and plenty of activities including cultivating crops, caring for animals, and participating in festivals. All-new controls for the Nintendo Wii Remote give players the chance to feel like they’re really farming! 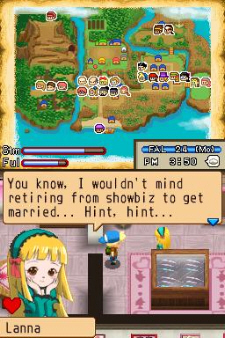 In the largest portable Harvest Moon experience ever, Harvest Moon: Island of Happiness for the Nintendo DS tasks players with building their own paradise as they find themselves shipwrecked on a deserted island. Starting off with an abandoned farm, a handful of seeds, and the determination to start a new life, it’s up to the player to attract settlers by making their farm robust and the island prosper, By harvesting crops, raising animals, and mining for precious gems, gamers will help the island grow into a vibrant town filled with people, businesses, and eligible bachelors and bachelorettes. Players can take on the role of a boy or a girl while falling in love and starting a family. For a competitive feel, gamers can also play against other ranchers via the Nintendo Wi-Fi Connection.

The Harvest Moon series began ten years ago when it launched on the Super Nintendo. Since then, the RPG/Simulation series has garnered a large and loyal fan base, and has appeared on most every home and handheld console available, including GameBoy, GameBoy Color, GameBoy Advance, Nintendo 64, GameCube, Nintendo DS, PlayStation, PlayStation2, PSP and soon the Nintendo Wii.

The series has sold millions of units in North America, with 20 incarnations over the course of 10 years. The games are usually set in rural towns packed with interesting and friendly characters where the player is tasked with running a successful farm, creating a family by getting married, having children, and befriending the people in the town to help build up their land. The games are great for players of all ages because they provide wholesome, non-violent entertainment anyone in the family can enjoy.

“The concept of Harvest Moon games is simple: hard-working people should get rewarded for what they have done. We want players to take this concept they get in the game, and apply it to their real life, too,” said Hiro Maekawa, President and CEO of Natsume. “We couldn’t be happier that the series has caught on with so many fans. It’s their tremendous enthusiasm and support that has kept the series growing and evolving over these past ten years.”