Dragon Age: Origins is an all-new game from Bioware and EA! It will be released before April 2009.

Unlike many of BioWare’s previous titles, Dragon Age: Origins is not based on a pre-existing franchise; the game mechanics and setting are being developed by BioWare specifically for this game. Dragon Age: Origins also utilizes a new game engine named Eclipse. It has not been confirmed if it will feature a toolset for creation of fan-made content, and while multiplayer was initially planned, the focus of development is on the single-player campaign and multiplayer remains unconfirmed. BioWare co-CEO Ray Muzyka describes Dragon Age: Origins as a ‘spiritual successor’ to the Baldur’s Gate series. 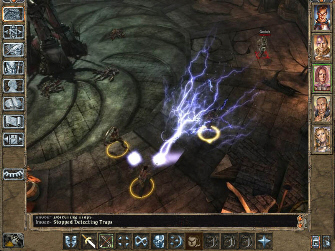 The setting is “medieval fantasy” and the plot has been described as “epic”, and involves saving the world and exploring the Kingdom of Ferelden. The developers have cited ‘realistic’ fantasy fiction such as George R.R. Martin’s A Game of Thrones and fantasy paintings by artists such as Frank Frazetta as inspiration for the game – they aim for a dark, mature, gritty fantasy setting as opposed to the High Fantasy Dungeons and Dragons BioWare fans are used to.

GameTrailersTV got the exclusive reveal teaser trailer which you can view below. The trailer is entirely done using the in-game engine and although it doesn’t look like anything mind-blowing, keep in mind that this is just the TEASER. It will be very interesting to see what actual gameplay is like.


The designers are incorporating “origin” stories for each race and some classes in the game. For example a Dwarf Noble will begin the game as part of the royal family in one of the Dwarven cities, and a Dwarf Commoner will begin on the streets of said city. Origin stories determine the background of the player’s character prior to the main events of the game’s story, forming an introduction to the game world and hours of game-play. People the player meets during the origin story may reappear throughout the game, some of whom may be adversaries.

While there is no tracking of alignment as in previous BioWare games, the moral choices of the main character throughout the game will still affect the story. While you may save the world whether you are good or evil, the decisions you make in the process will change the world around you, deciding who will become King for example, and affecting nations and races and their places in the world. These decisions will also influence your companion NPCs, and could ultimately lead to an NPC deciding to leave your party if he or she does not agree with your approach.

The game may feature a newly designed camera, which will follow the party in a third person ‘explore mode’ while out of combat, but will swing up to a RTS style, top down, camera mode while in combat. As with the Baldur’s Gate series, players will be able to issue orders to NPCs in real time or while the game is paused, and queue up actions such as spells and special attacks.

The following features are confirmed but not final

No other details have been announced including platforms or release date, although it’s apparently confirmed that the game will be on PC . . . we’ll have to await E3 to find out if it will be coming to consoles, but I’d be extremely surprised if it didn’t at least come to the Xbox 360 given the success of Mass Effect on that platform.