Eidos has released Looney Tunes: Cartoon Conductor (known as Cartoon Concerto elsewhere), an all-new music rhythm game for DS a while back that plays almost exactly like Elite Beat Agents.

The reason for the Elite-Beating action is due to an orchestra, who’s music you must compose and then “conduct” (which is where all the Elite-Beating comes in) with your Nintendo DS stylus. What makes the game funner than your average Elite-Beat-clone is that you not only play classic Looney Tunes music, but you also will unlock classic Looney Tunes cartoon clips featuring the lovable cast of Warner Bros. favorite stable of whacky characters! 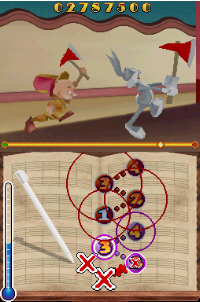 * 18 fantastic levels – 5 of which are bonus levels and each level has a different piece of music from some of the most well-known cartoon scenes.

* Watch the hilarious scenes as you play – As you play through each level, you’ll be prompted to look at the top screen of the DS to watch those memorable scenes re-enacted.

The game was developed by Amaze Entertainment under license from Warner Bros. Interactive Entertainment and was released on May 27th at a price of $20.