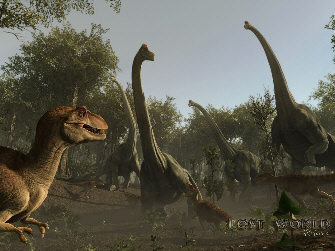 The Lost World Returns is an all-new Crysis-mod that seeks to re-create the feel of the Jurassic Park movies using the incredible graphics of Crysis via the CryEngine2 by CryTek.

The goal of the mod, according to the Lead Level Designer, was to simply create a world with dinosaurs in it for gamers to play around with. But he wanted to go much deeper than that. He didn’t want the dinosaur-world to simply allow for target practice, but also to have a very well thought-out eco-system, where where herbivorous calmly eat on large green hills, while large carnivorous hunt on their territory, within a wide range of environments including Hills, Beach’s, Dense Jungles, Caves and Mountains.

The developers have made it a point to ensure that The Lost World Returns plays nothing like the recent Turok. You won’t be shooting up waves of dinosaurs, in fact most of the time you will not have a gun on-hand. Just as you wouldn’t if you were realistically stuck on an island. There also won’t be that many dinosaurs, but what they lack in numbers they make up for in intelligence and ferocity.

For example, you’ll need to keep track of which way the wind is blowing, because a T-Rex can smell your scent. And if they attack, you’re done for, as they’ll eat you whole in one small bite. And make sure you do not disturb a mother’s young, or there will be hell to pay. Then again, if she does chase you, she can be distracted if she comes across an even more attractive meal. Which can happen due to the fact that there are many other species of wildlife on the planet outside of dinosaurs.

According to people who’ve played the game, the sheer level of detail is awe-inspiring. You’ll want to stare at the dinosaurs just to gawk at how brilliantly modeled and realistic they are . . . bad idea by the way. What’s even cooler is how realistic everything is. You may expect realistic physics on the trees, which can be shot up and broken just like in Crysis, but the dinosaurs can, and will, eat the leaves . . .

Not much of the story has been revealed, but there will be other humans on the island with different agendas, who may prove to be just as dangerous as the dinos themselves.

The game will also go beyond single-player and will offer a series of co-op modes to be played with a friend online.

There will also be a free-roaming option that allows you to snap pictures of the dinos, just like Pokemon Snap! But be careful where you point that flash . . . unlike Pokemon, these creatures won’t hesitate to attack!

The team who designed the mod (they go by “LWR team” or “DIG team”) also has some unique members to the group. In addition to the usual 3D artists, concept artists, level designers, programmers, etc., they also have two paleontologists and adviser’s, music composers, former CryTek employees, and people already working professionally in the video game industry. They’re sole goal is to create a game where “dinosaurs still exist” and yet offer a brand-new experience.

The team is already in the pre-production phase and have already taken steps to avoid any kind of copyright issues or infringements with the Jurassic Park license by moving away from anything that might draw too-close of parallels, to ensure that they’re game isn’t shut down or they aren’t sued.

In addition to all this, the developers are hiring script writers and voice actors to make the game that much more authentic. They are also trying to make the game feel as cinematic as possible, just as if you were IN Jurassic Park.

If the game sounds ambitious, you are spot on. So ambitious is the team in fact, that they even plan to release their carefully constructed ecosystem into the educational marketplace as a teaching tool. Which is just flat out awesome.