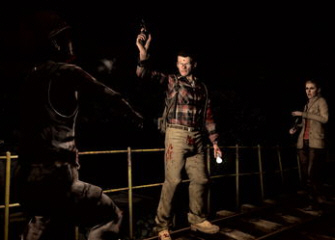 Siren Blood Curse is hitting the PlayStation Network this month in an episodic release. The U.S. got the Siren Blood Curse demo yesterday. The survival horror game takes the player to a remote Japanese mountain village where a strange human sacrifices ritual ends in bloodshed, a ghostly siren wails — and for an American film crew trapped on the mountain, a nightmare is unleashed. Steel yourself for a terrifying ordeal as you fight to stay alive against the savage Shibito…

Thanks to Nastasia for the tip!

PS: The first episode will be available for download on July 24th at a price of $9.99. Each of the other three episodes will be similarly priced, with the full game costing $39.99.