A look at EA’s Zubo for DS 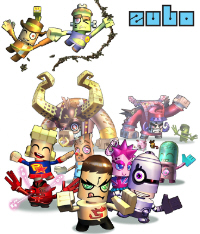 Zubo has been announced by EA’s Casual label as a new wholly owned, original intellectual property for DS.

Created to target an audience of 7-11 year old boys and girls, Zubo is a music-rhythm-based action game that features a unique set of bullet-headed, mini-fig like characters known as Zubos. The game will ship worldwide later this year.

Players enter the world of Zubalon to help the colorful and zany inhabitants, the Zubos, defeat an evil force which is bent on world domination. Players can befriend the Zubos they meet along the way, feed and nurture them, help them gain skills and strength, and assist them in their battles with the enemy, the dastardly Zombos.

A key element to Zubo is music, which is intrinsic to Zubalon from its tuneful plant life through to its currency of musical notes. The player will use the music to drive the battles forward, synchronising their stylus action and tapping in time with the musical beats to win battles.

The game is broken down into a number of themed worlds, and each world features it’s own team of Zubo that you can befriend via tasks and mini-games. You can have up to three Zubo in your party, and there will be up to 55 different Zubo in the game. All of them will feature unique attacks during combat.

The combat itself is performed through an Elite Beat Agents-esque rhythm game that has you first choosing your attack and then attempting to carry out said attack by sliding or tapping the across the screen with the stylus. Fail and so does your attack.


“Zubo represents the culmination of a dedicated incubation project, which specifically sought to develop a new videogame property for boys and girls under 12,” said Harvey Elliott, Head of the EA Bright Light studio in Guildford, UK.“The team here has designed a rich, immersive and, above all, enjoyable experience– one that will live in the schoolyard, at home or on the move.”

Zubo pushes the graphical limits of the DS to the max with scenes that boast a minimum of 2,000 polygons and although it’s aimed at kids, it looks like it may have some broader appeal as long as the developers can make the gameplay fun enough.