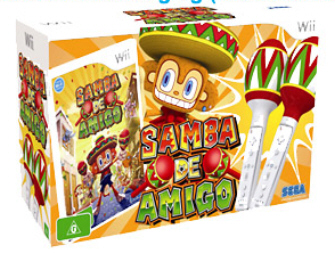 Samba De Amigo is the Dreamcast classic that helped to create the now-popular rhythm music genre known as the rhythm/music genre.

As you may have heard, a new version has been created exclusively for the Wii. This vibrant and addictive new game lets players shake to the beats of a samba-infused soundtrack comprised of popular new songs as well as fan-favorites from the original game.

Playing as the grinning, sombrero-topped monkey, Amigo, players shake the Wii Remote and Nunchuk like maracas, in time with the visual beats of the music on-screen. The perfect party game, ‘Samba De Amigo’ is packed with lively stages and a host of colorful characters.

It has now been revealed that new maraca casings will be available for purchase separately. The Wii Remote fits into these to give the game a feel that better mirrors that of the original Dreamcast version, which came with maraca controllers, whereas the Wii version just uses the Wii Remote & Nunchuck to mimic maracas. 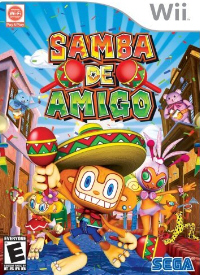 What’s also interesting is that the box art for Samba De Amigo on the above Maraca Shells box would seem to suggest that the Wii “Pay & Play” option was removed in favor of free online play. As you can see the Nintendo Wi-Fi Connection logo is blue on the top of the page, instead of red, like it was on the old box art to the right.