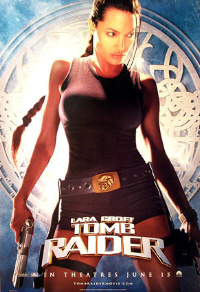 Ever find yourself wondering what the Best and Worst game-based movies are? For most of us, there are quite a few that stand out and come to mind immediately, in both the Best category and Worst category, from Lara Croft: Tomb Raider, Doom, the Resident Evil trilogy and Hitman to Mortal Kombat 1 & 2, Super Mario Bros. and . . . Wing Commander?

Some movies are much better known than others and everyone seems to have their own opinion . . . I for example, own BOTH Mortal Kombat and Mortal Kombat: Annihilation on DVD, and guess what?! I do in fact enjoy both of them . . . . I mean hey, for those of us that frequent the Sci-Fi Channel and it’s original movies, MK: Annihilation isn’t that far off from what we’re used to. Some people actually enjoy B-movies, believe it or not.

Still it will be interesting to see where the current crop of upcoming game-based movies leads, as there are some heavy hitters on the list. This fall we will have a movie based on Max Payne, in which Mark Whalberg will take on the role of the game’s titular hardboiled cop. And next year will give us a Prince of Persia movie, which will purportedly showcase the talents of director Mike Newell (Harry Potter and the Goblet of Fire) and actor Jake Gyllenhaal (Brokeback Mountain). It’s also rumored there will be a Gears of War movie, and movies based on: Fatal Frame, God of War, Bioshock and Metal Gear Solid, among others.

And yes, I purposefully refused to mention Uwe Boll and his horrible set of movies (The House of the Dead, Alone in the Dark, BloodRayne, In the Name of the King: A Dungeon Siege Tale and the upcoming Postal). That decision needs no explanation.

Based on Metacritic research, here is a list of the ten best-reviewed movies based on video games.

And then you have the bad list. Here is how Metacritic rates the ten worst video game based movies.

So what are some of your best and worst videogame-based-movies? Let us know by leaving a comment.