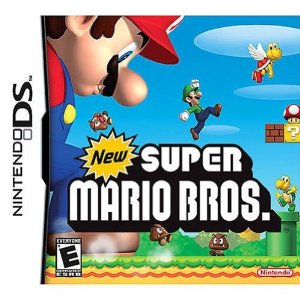 These New Super Mario Bros. cheats for the DS best-seller show you how to unlock extra worlds, how to play as Luigi, do the classic 99-lives 1UP trick and much more.

Here is a video walkthrough for lots of tips and tricks throughout the game. They even talk about New Super Mario Bros. 2!

How to play as Luigi in single player mode:
At the “select a file” screen, keep the L and R buttons held down and choose one of your saved game files with the A button.
Now you’ll play as Luigi instead of Mario!

How to Access the Secret Challenge Mode:
While paused on the map, press L, R, L, R, X, X, Y, Y, to enter the secret Challenge mode. You will now be unable to go back to an area that has scrolled off the screen while playing a level. This cheat only works after you finish the game.

Extra Lives at Flagpoles:
As you may know, jumping onto the flagpole at the stage’s end will net you some points (up to 8000). If you somehow manage to jump high enough and land on the very top of the flagpole though, you will automatically receive an extra life (1-Up).

Original Mario Bros theme and fireworks:
If you beat a level with a time left of x11, x22, x33, x44 etc you get fireworks and the original Super Mario Bros. level completion tune will play.

Warp Zone Cannons List:
In some worlds, there are cannons you can access (usually through taking secret exits). When you enter the cannon area, there will be a large cannon in the area, and a world number written below it. If you want to warp, simply drop into the cannon and blast off!

World 5 Warp #1: Take the secret exit from the World 1 Tower.

To get a special Background pattern, beat the game once. To get unlimited Toad House items, clear every level, including lettered bonus levels.