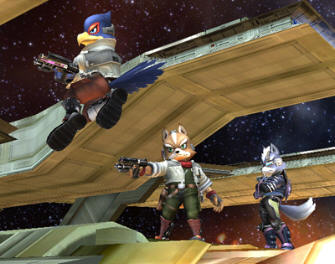 Nintendo game designers including Shigeru Miyamoto have hinted at a Star Fox Wii sequel during past interviews. To quote Miyamoto in a 2006 interview: “The Wii controller could be easily used to control the airwing in Star Fox.” While that may seem obvious, as Spong who translated the Famitsu interview says, why would Miyamoto even bother mentioning it unless Nintendo was already planning Star Fox Wii over two years ago.

Following later that year was a Nintendo of Europe interview with Star Fox Command (DS) producer Takaya Imamura, in which these further confirming words were published…
Question: “Star Fox would be perfectly suited to Wii’s controls. Are we ever going to see a Wii version?”
Answer: “I wonder how the adventure of Fox and friends is going to go next time?! I have come up with some idea in my mind, but it is still just a small one. I will try my best so that I can deliver it to you some time!”

Keep in mind there are no Nintendo titles announced yet for the second half of 2008 and beyond. Add to this that recently Marc Franklin, director of public relations at Nintendo, told Gamepro that Nintendo “will be announcing several new titles that core gamers will be interested in around the time of E3.” — Since a Star Fox sequel on Wii is a shoe-in, expect the action-shooter title to be unveiled by Nintendo at the E3 Summit 2008 on July 15-17th.

PS: With Shigeru Miyamoto commenting that the past F-Zero and Star Fox collaborations with outside development houses (in Star Fox: Assault’s case Namco) turned out to be a disappointment for Nintendo, Star Fox Wii will likely be internally developed at Nintendo. To quote him: “consumers got very excited about the idea of those games, but the games themselves did not deliver”.