Pikmin 3 very well suited for the Wii, according to Shigeru Miyamoto 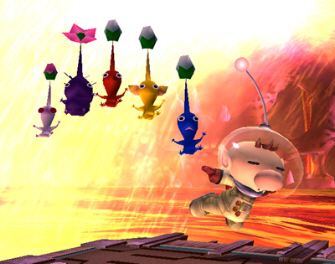 Nintendo game designer Shigeru Miyamoto has hinted at a Pikmin 3 sequel several times during interviews. To quote him in a 2007 interview: “I certainly don’t think we’ve seen the last of Pikmin. I definitely would like to do something with them, and I think the Wii interface in particular is very well suited to that franchise.”

Then following last year’s IGN interview with Mr. Miyamoto — on April 18th, 2008, these further confirming words were published in a Cnet article: “For now, Miyamoto looks ahead to other projects for the Wii, mentioning his desire to continue the Pikmin series.”

Keep in mind there are no Nintendo titles announced yet for the second half of 2008 and beyond. Add to this that yesterday Marc Franklin, director of public relations at Nintendo, told Gamepro that Nintendo “will be announcing several new titles that core gamers will be interested in around the time of E3.” — Since it’s been all but revealed that Pikmin 3 is in development for Wii, expect the real-time strategy title to be unveiled by Nintendo at the E3 Summit 2008 on July 15-17th.

Update E3 2008: Pikmin 3 was officially confirmed as in development for the Wii by Shigeru Miyamoto during a roundtable discussion after the Nintendo Pre-E3 Press Conference at E3 2008. Where he also revealed that new Mario and Zelda games are in development for Wii and that the teams are actively working on new projects.

However no new information, screenshots, or a release date was given for the new Pikmin 3 game. But hey, at least we know it’s definitely coming!

Update E3 2009: When Shigeru Miyamoto was asked about where Pikmin 3 wasn’t shown at Nintendo’s E3 2009 conference, he replied:

“I’m sorry. Unfortunately we haven’t been able to expand the team size very much, because we’ve been working on so many different games that we’ve shown off at the show. So the team is working very hard, but it’s a bit of a small team. The work that they’ve been doing is quite nice. My basic idea is that the sense of the depth of the game and the simplicity of the control will all be there.“