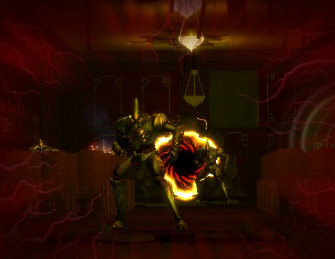 In the Wii-exclusive FPS The Conduit, due Q1 2009, Washington D.C. finds itself the epicenter of an extraterrestrial attack by aliens called The Drudge. It’s up to you, playing as the secret service Agent Ford, to discover the truth hidden behind the invasion.

Main features of The Conduit include:
* Three modes for online play. Offline play is single-player. LAN multiplayer likely. They’re trying to get voice chat online.
* Enemies use portals to bring in reinforcements; destroying them will be key.
* Set in fictional Earth of the near future, the story takes on a dark conspiracy-theory tone that unravels pretty fast after you get sent to investigate an extra-terrestrial encounter.

Watch the first The Conduit video:


High Voltage’s Quantum3 Tech Demo of the engine that The Conduit Wii game will be using.

Video by IGN, info from a The Conduit interview via Kotaku