Battle of the Bands Wii Review

Battle of the Bands for the Wii (previously called Band Mash-Ups) is a unique rhythm game that is played entirely by using the Wii Remote. Just like in virtually all rhythm games, icons scroll up from the bottom of the screen (instead of the top, but scrolling none the less) and you must move the remote either left, right or down depending on the corresponding icon as it reaches the top. You’ll also have to make a stabbing motion, as well as big or small “waves”, which require you to quickly wave the Wii remote (using a smaller or bigger motion depending on the size of the Wave icon). 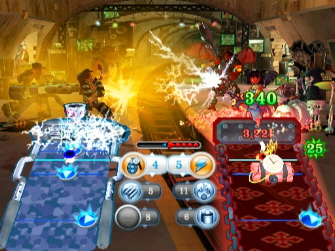 The “Battle” portion of the title comes from the fact that you are always facing an opponent whose icons you can see scrolling up next to yours on his own board next to yours. As you play you will get the chance to launch attacks at your opponent that have various effects, like making their icons smaller, making them come at you faster or reversing the order. These attacks are what damage your opponent and earn you points, the team with the most points at the end of a round wins.

But of course, all of this isn’t too far removed from what we’ve seen previously. So what is it that makes Battle of the Bands unique, you say? It’s the fact that during the course of a match, you will have the chance to hear the songs being played in one of five genres: Marching Band, Hip-Hop, Country, Latin and Rock. The game features a total of 35 songs with each song having it’s own version of those five genres. This is something that definitely hasn’t been attempted before and it, in addition to the fact that you play the game with the Wii Remote (no Nunchuck used) manages to separate it from the pack.

However nothing in this game is done very well . . . with the possible exception of some of the song covers, which are fun and funny in their own right. During gameplay, you can block attacks using the B Button, you also unlock new attacks in addition to new stages and new bands to play as, but none of that really matters much since the gameplay stays the same pretty much no matter what band you use, and the storyline isn’t even worth mentioning.

The game features cover versions of thirty licensed songs, each presented in five different musical styles as mentioned above. The songs include:

The gameplay though simply lacks what makes other rhythm games so exciting, even though you wonder what else they could’ve really done without including an instrument with the game. And although it may sound easy, playing with the Wii Remote is a bit harder than it sounds, and it takes a while for you to learn exactly how you must swing the Wii Remote, and sometimes you’ll seem to have done a motion and it may register it as something else. The game’s tutorial is also really stupid, since it doesn’t actually SHOW you how to do the motion, it only tells you . . . using text! And as far as the “battle” portion of the game goes, it really doesn’t change it as much as you would expect. There are portions where you will have to guard an onslaught of attacks using the B Button, but outside of that there really isn’t anything about the attacks that makes the game feel any more special than any other rhythm game out there.

One of my main issues with the game is simply how it lacks . . . . excitement. Everything seems to be understated, and when you couple that with the game’s lack of voice (except for the songs, but everything else is told through text) and the sub-part graphics it really dampens any sense of excitement you should feel when playing a game like this. I feel that spiffier graphics, effects, sound effects and menus would’ve gone a long way to making the game draw you in quicker. As is, it almost feels like the game could’ve been done on the N64 or something. And while that obviously is not true, that’s how you will feel when playing it in relation to most games nowadays. In fact I have the sinking feeling that if this game had been on the 360 or PS3, it would’ve had not only sharper graphics but full audio speech . . . and that’s just a shame.

Alas, Battle of the Bands is a solid rhythm game for those who want something fun to mess around with and it will keep you entertained as long as you don’t go into it expecting something on par with Guitar Hero or Rock Band. Obviously playing the game multiplayer works better and is funner than playing the single player as it’s always better to play with friends, particularly in a game like this where your defaulted to playing “against someone”. The game is low on modes though . . . Although there are higher difficulties for you to try and tackle.

It’s easy to feel good with this mix up of songs and music genres. Watch the Battle of the Bands gameplay trailer.

All in all, if you can find the game for cheap or know what you are getting into, then you will surely have some fun with Battle of the Bands. Heck, it’s almost worth the price of admission just to hear Korn’s “Coming Undone” in Country style!

FUN FACTOR: 7.0
Battle of the Bands is nothing special, and the Wii Remote is definitely not a replacement for an actual instrument like in Guitar Hero or Rock Band. But for what it is, it works, and you can have fun with it as long as you aren’t expecting too much.

Music & Sound: 7.5
The sound effects aren’t very good but you have to give the developers props for trying and doing some pretty interesting covers of all the songs in different genres. Some of them, particularly the Country ones, can be hilarious. Sadly, the quality of the songs isn’t high at all, and sometimes the music reminds me of something you’d expect to hear in an N64 game . . . . But thankfully a lot of the covers are good enough to carry the rest of the lackluster sound.

Ingenuity: 7.5
35 songs each done in one of five genres? All playable with the Wii Remote? They get brownie points from trying, but it could’ve been done better.

Replay Value: 6.0
If you like the game, then it can keep you busy for a while but there definitely could’ve been more modes and simply more meat to the game.