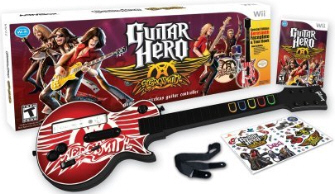 From Guitar Hero: Aerosmith‘s 41 songs set list, not the entire soundtrack will be Aerosmith hits. The Xbox 360, PS3, PS2 and Wii music-rhythm game is said to have about 60% Aerosmith and 40% artists that either inspired Aerosmith, played with Aerosmith, or whom Aerosmith admires.

So far 28 songs and their artists have been revealed for Guitar Hero: Aerosmith’s soundtrack.

Stone Temple Pilots, Deep Purple and The White Stripes are also expected to be included. They’ll be revealed later on as the June 29th, 2008, release date nears.

Rock out with this Guitar Hero: Aerosmith trailer:

Compiled from articles by Kotaku & Joystiq.