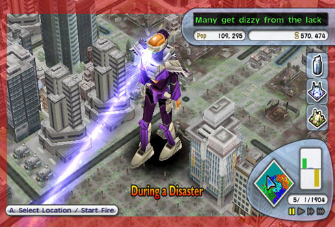 Electronic Arts announced the first details for SimCity Creator, exclusively for the Wii and Nintendo DS. SimCity Creator is an open-ended, highly creative simulation / strategy game with a sense of humor that allows players to utilize the distinctive gameplay aspects of the Wii and Nintendo DS to create, enjoy and destroy epic cities. The most accessible and light-hearted game from the SimCity franchise, SimCity Creator will be released on September 22, 2008 in North America and on September 19, 2008 in Europe and Asia-Pacific regions. SimCity Creator is designed to be a city-game experience for families and players of all ages. More details on each version below…

SimCity Creator for the Wii:

Be a powerful mayor — create, enjoy and destroy your ultimate city. Start by zoning your city, constructing homes, businesses, factories, skyscrapers, freeways, railroads, and much more. SimCity Creator is a visually exciting experience with a completely new user interface, designed specifically for the Wii and the Wii remote. You’ll discover many ways to customize your city, including 13 city styles to explore, such as American, European and Asian themes.

You can also place a selection of more than 30 “Hero” buildings into your city to make it distinctive and momentous. Some of these iconic buildings are based on the current day, some on history and some on fantasy. The more city styles you explore, the more Hero building options you have.

For the first time, take the liberty to build transportation systems with free placement of rounded and curved roads and rail lines, taking your city to new creative and curvy heights. And get a new perspective on your cityscape from a helicopter, a jet or a propeller plane which you can use to fly over your creation. Check out what you’ve built in your aircraft of choice!

Disasters that players of SimCity always love remain an important and entertaining element in SimCity Creator. Using the Wii remote you can create earthquakes, tornados, call in destructive robots and monsters, create fires and discover many more ways to cause havoc. You created it, and now you can destroy it. With hours of fun and replayability, the fate of your city and its citizens are in your hands!

Guide your city from ancient times into the future with SimCity Creator for Nintendo DS. Evolve your city through time, starting with ancient times, the middle ages, modern times, present day and the future. Four play modes are available, Challenge, Free Play, Chance Encounter and Gallery, giving options to make the game as challenging or as creative as you want. Earn epic landmarks along the way to enhance your city and mark your progress into the next era. Choose your path through history and make a city for the ages.