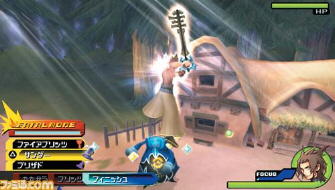 The PSP-exclusive Kingdom Hearts: Birth By Sleep is still without release date, but director Tetsuya Nomura expects it to be the last one released out of the three portable Kingdom Hearts games, with the two others in development alongside it being: Kingdom Hearts 358/2 Days (DS) and Kingdom Hearts coded (Mobile).

A so far unseen Square Enix Character Show Case trailer was shown off-limits to cameras. Someone has now leaked recorded footage of the Tokyo event showing the Kingdom Hearts PSP game in motion for the first time! I hope you don’t mind the low quality.