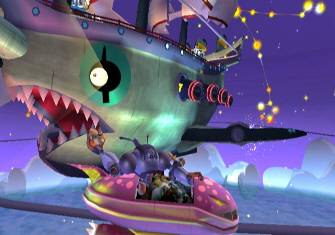 Capcom today announced a new Wii-exclusive action game Spyborgs. In Spyborgs, players take on the role of a diverse team of five bionic superspies in a fight to save the world from a group of dastardly villains. Wii gamers will be set to save the world when the game launches in 2009.

The first title developed by Bionic Games, a newly-formed development team comprised of former Insomniac Games and High Impact developers known for their work on hugely popular franchises Ratchet and Clank and Resistance: Fall of Man, Spyborgs is a unique action-adventure game set in a stylish world that resembles a Saturday morning cartoon. Engaging players in team-based challenges designed to utilize 2-player co-op play, Spyborgs takes the theme of “team” to a whole new level of fun. In Single-player mode the “team” theme continues as players jump from one member of the superspies’ team to the next, rapidly tackling different challenges designed around each character’s unique abilities. Fast, addictive gameplay, unique controls offered by the Wii Remote, and a storyline that refuses to take itself too seriously, Spyborgs will provide players with a dynamic and fresh gaming experience like no other.

Players jump between the identities of a team of five bionic superspies to combat a rogue squad of wacky, dysfunctional super villains. Each character has unique powers to match their super-spy skills, such as heavy firepower, martial arts, bladed weaponry, acrobatic skateboarding skills or pure robotic destruction. This cast of characters may make a misfit group individually, but by utilizing them as a team, the Spyborgs will have the power to save the world – if they don’t blow themselves up first! Spyborgs’ tongue-in-cheek action and compelling interactive cartoon theme keeps players engaged from the first episode to the last with one of the most fun and entertaining games to be developed for the Wii system.